Would you spend $70,000 to electrify a 1960s Volkswagen Beetle? You’d be surprised how many people would. There’s a five- or six-year wait to have it done at EV West, an electric vehicle speed shop in San Marcos, California. According to owner Michael Bream, the shop has electrified a 1954 Beetle for the actor Ewan McGregor and is currently converting a VW Microbus for funnyman Zach Galifianakis.

“We’re taking the best of the latest technology and pairing it with the most soulful, sought-after vehicles ever produced,” says Bream. “We do these for customers who are not as interested in saving the environment as they are in saving their car. These are cars that people hold extremely near and dear to their heart, cars that might’ve been in the family for decades.”

EV West started doing electric retrofits in 2009, and is one of the largest conversion shops in the US. It has done about 100 on-site conversions, but 1,000 or so customers have purchased kits from the company and either taken the DIY route or paid a local mechanic to do the conversion. 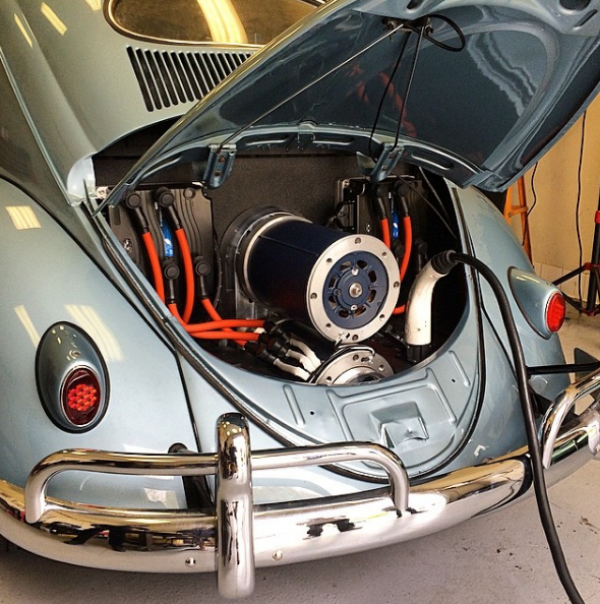 Bream says the iconic VW Bug is ideal for electrification, noting “there’s no plastic anywhere in that car. It’s all chrome, glass, and steel. With our modern drive line in it, there’s no reason why that car can’t be running every bit as good as it is today in 50 or 100 years from now.”

Bream points out that EV West is really a speed shop. In August, its custom-built Electraliner set a new record for electric vehicles in its weight class (under 2,200 pounds) at the Bonneville Salt Flats in Utah by hitting 240mph. Bream says his team will be back next year with a new vehicle, hoping to break the overall electric record of 314mph. 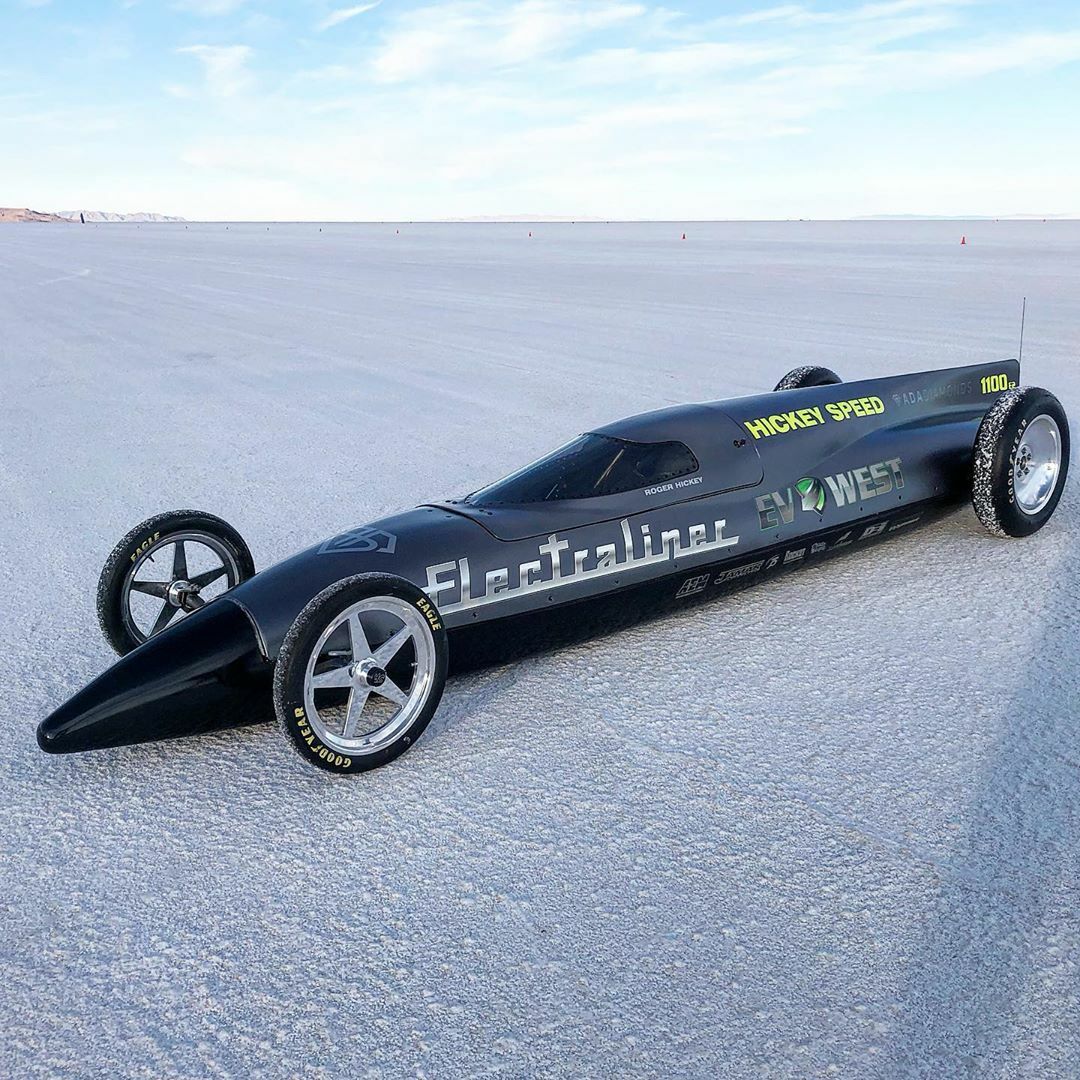 EV West does conversions for a San Diego-based company called Zelectric. David Benardo, who runs Zelectric with his wife Bonnie Rodgers, estimates that Zelectric has converted 30 classic cars since it began in 2012. It has been converting five or six cars a year but like other conversions shops, it’s expanding.

One of Zelectric’s customers was a couple who brought in a ‘65 Bug that was given to them as a wedding present the year it came out. The couple drove the Bug all over the US and up to Canada before covering it with a tarp and leaving it unused in their driveway for 14 years.

“It’s part of their family and they didn’t want to get rid of it,” said Bernardo. “They were hoping that maybe their kids would take it but then they found out about us.”

Such pricey electrifications make the vehicles—which are typically valued at $30,000 before the electric upgrade—worth $100,000 after they’re electrified, says Bernardo. He acknowledges that electric vehicle enthusiasts can get a high-performance Tesla for a lot less.

You might spend a small fortune electrifying a classic car, but you will realize a fuel savings. Bernardo says that in his area of Southern California, a zelectrified vehicle can go 100 miles on just $3 dollars worth of electricity.

Zelectric only works on Volkswagens and Porsches, though Benardo says the small firm gets emails every day from around the world asking whether they can “convert this and convert that.”

“It’s just easier to stick with with one [or two] make[s], and there’s so much support in the Porsche and the Volkswagen community around them,” says Bernardo. “There are a thousand companies making parts for these cars.” 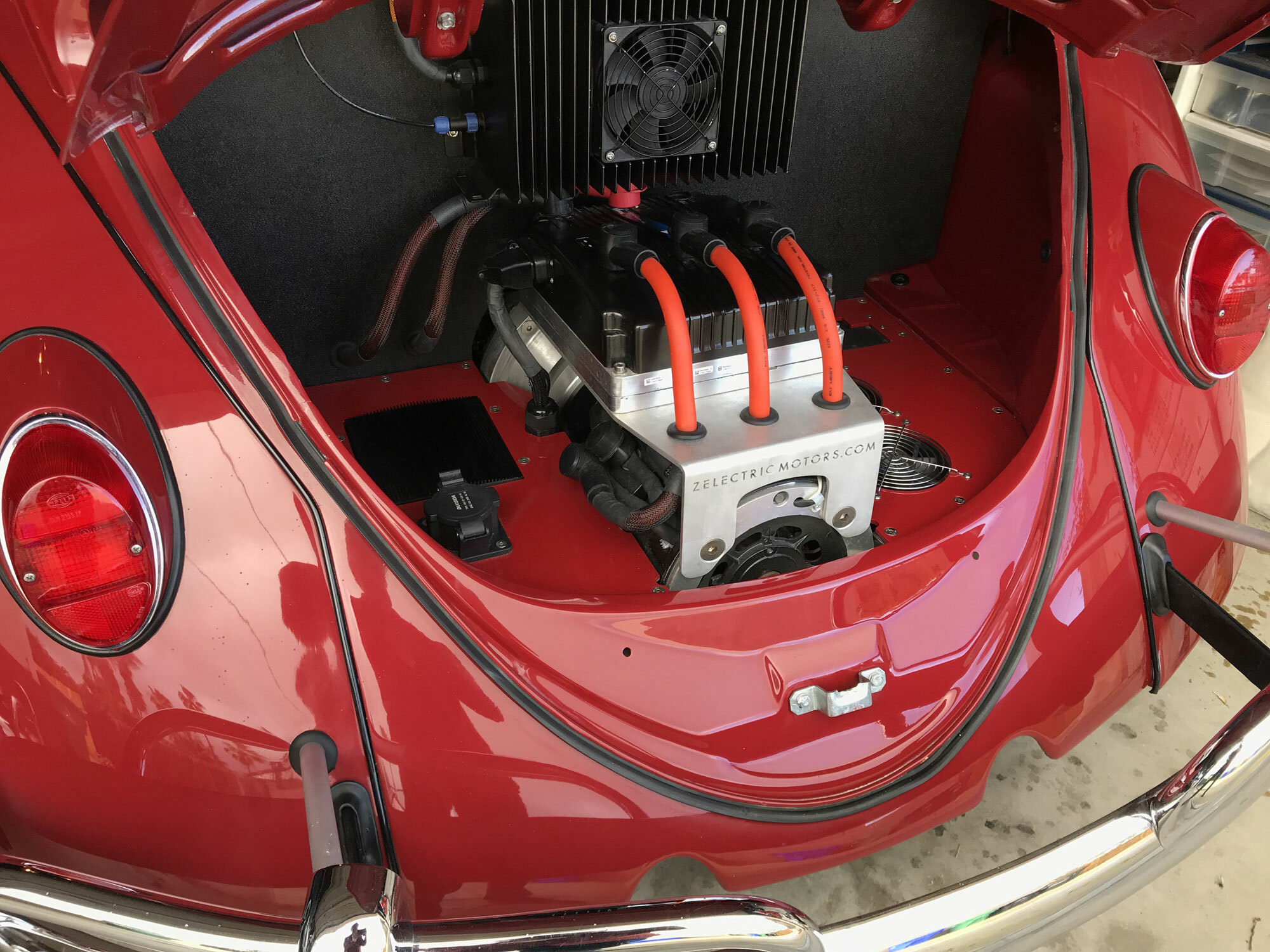 Because the conversions often involve figuring out where to place batteries in the vehicle, the battery packs from wrecked Teslas and Nissan Leafs get taken apart and individual battery modules are sold. Once a car owner gets an electric motor and enough battery modules to power the vehicle, there’s a lot of work to get the all-electric drive train connected. 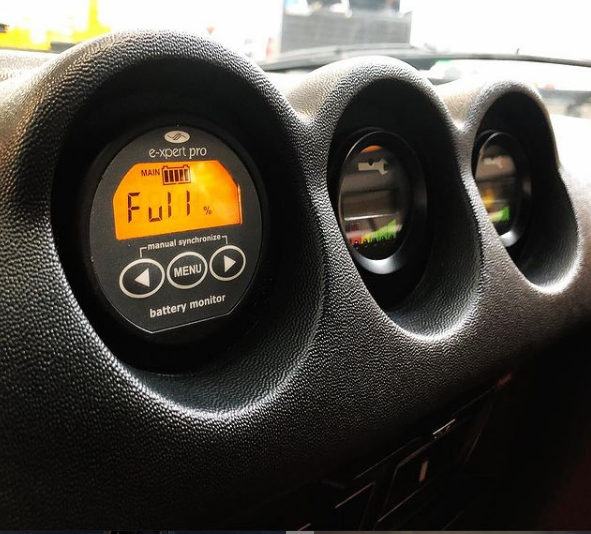 “Basically you’re paying for the re-engineering of an entire vehicle,” says John Voelcker, an auto reporter and analyst who specializes in electric cars.

“If it’s a car [model] we’ve converted before and the parts are available you’re looking at 150 to 200 hours [of labor],” says Marc Davis, founder of the Moment Motor Company in Austin, Texas. “It’s not like you just remove the gas tank and put the batteries where the gas tank was. Batteries often take up 10 times as much space as the gas tank. There’s a fair amount engineering and experimenting to make it work.”

That includes using a CAD program to design new parts and then machining them. Davis, who drives an electrified 1973 Alpha Romeo, estimates that when someone brings in a car that his company has never converted before, it can take 500 hours or more to do the conversion.

Since Moment began in 2017, the company has done eight conversions and has another 15 either in the works or waiting in line. Davis drives his customers’ cars around Austin before the vehicles are turned over to their owners. On a regular basis, he will pull up to a stop sign and hear strangers shout out their admiration of the classic automobiles. If he pulls into a parking spot and strangers start gushing over the car, he’ll pop the hood to show off the electric innards.

“Their mind explodes when you show them it’s electrified,” Davis says. 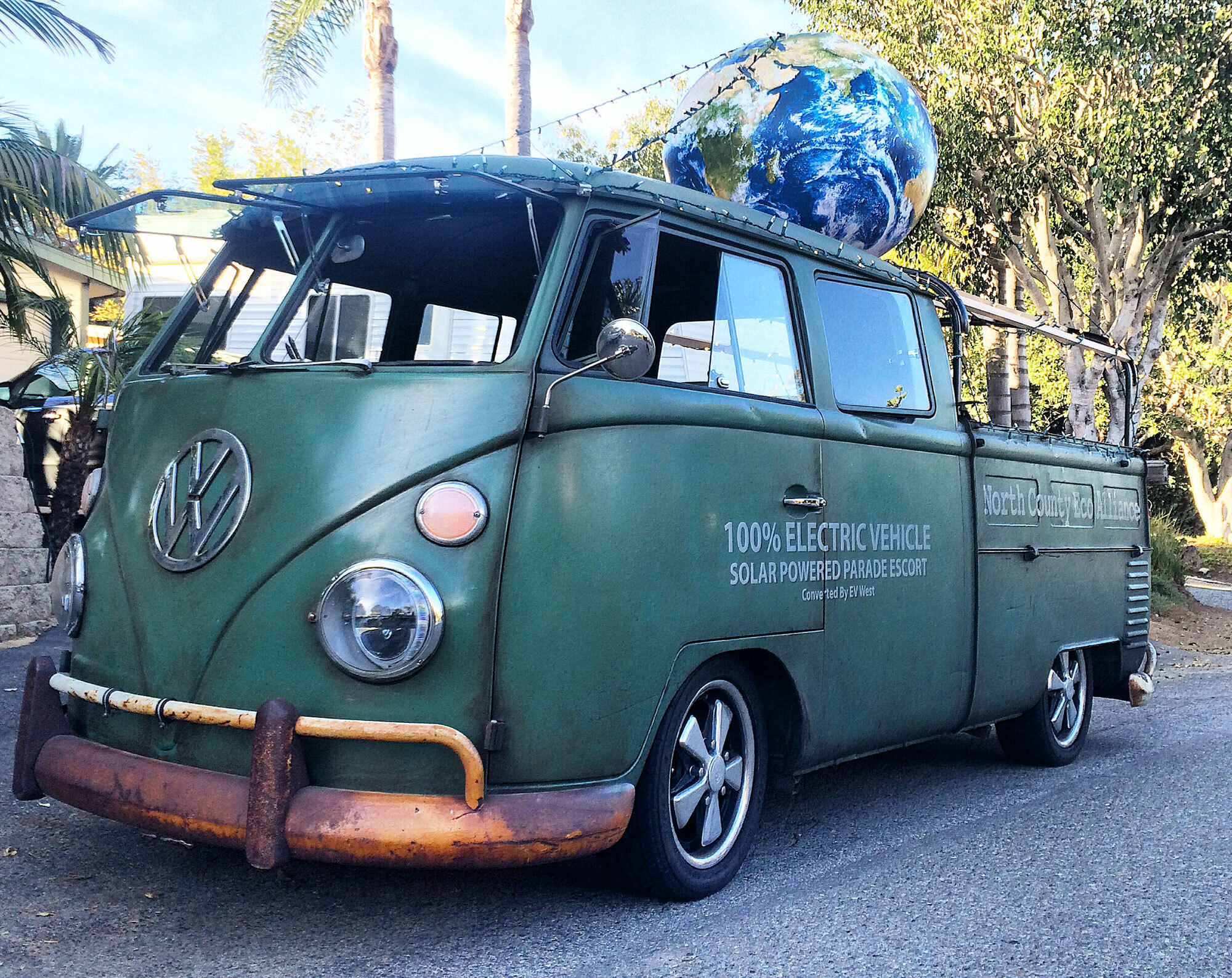 The cost of a conversion at Moment Motor Comany varies depending on the size of the car. These so-called electro-mods can cost as much as $100,000. If you’re not able to cough up those kinds of bucks, there are some kits for sale. EV West is selling conversion kits for several Porsche and VW models, as well as the Toyota MR2. Their kits without batteries cost just under $8,000. A kit for VW Beetles manufactured between 1956 and 1977 includes batteries and will set you back close to $17,000. EV West’s Bream estimates that a veteran VW mechanic using EV West’s schematics and tech support could do the conversion for around $20,000 in labor.

“It’s been our experience that when we work with mechanics, they tend to do a fantastic job,” says Bream. “People who have a lot of experience with electronics but no mechanical experience tend to struggle the most.”

Auto analyst John Voelcker is hoping that someone develops kits for such classic cars as ’55 Chevys and classic Corvettes. “Once someone gets an electric vehicle and drives it for a while, they understand that it’s simply a better power train,” says Voelcker. “It’s smoother, calmer, quieter. And you always win the stoplight Grand Prix.” 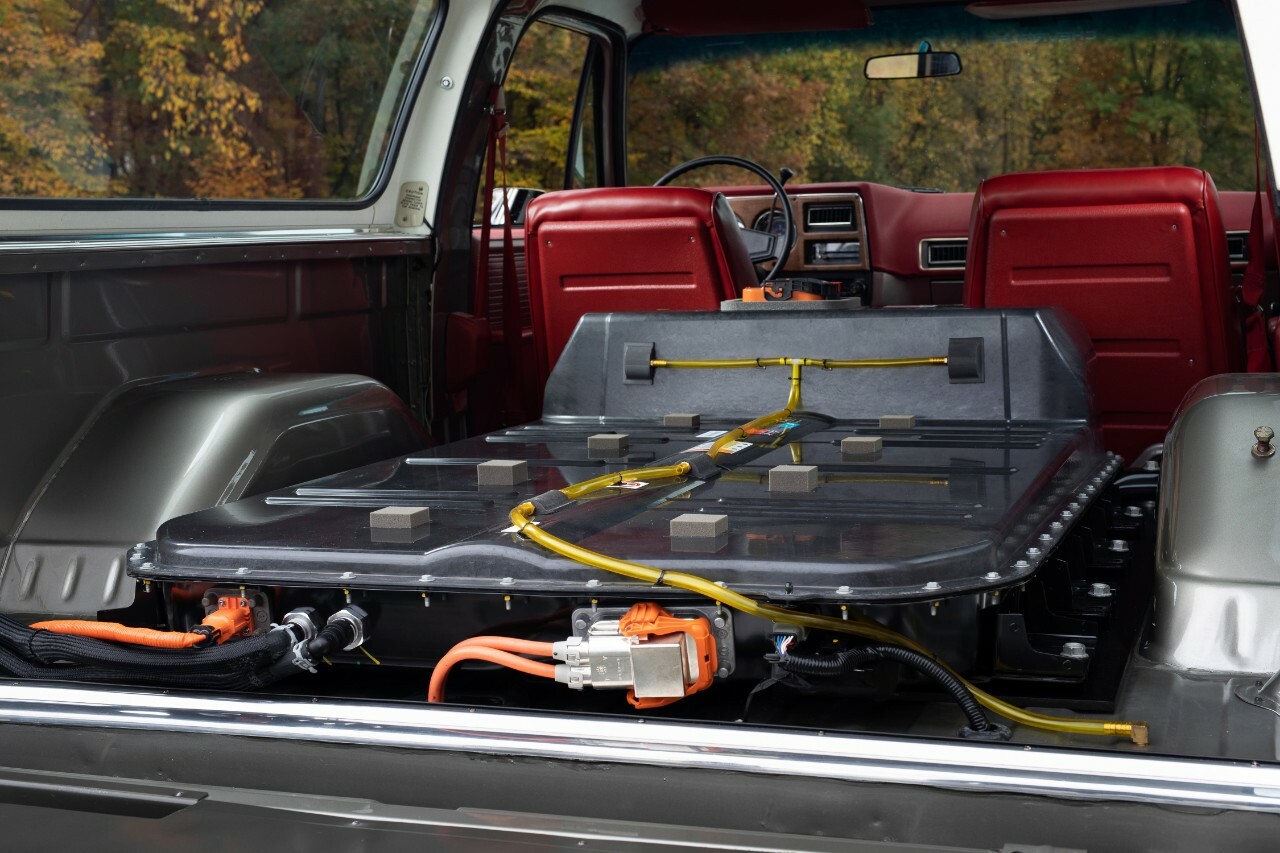 Automakers have long offered so-called crate engines to increase performance of their stock models. In the second half of 2021, Chevrolet is releasing what it calls Electric Connect and Cruise, or eCrate, an aftermarket electric powertrain that includes a Bolt electric motor, battery pack, DC-to-AC inverter, a DC-to-DC converter, wiring harnesses, controllers, and water pumps for battery heating and cooling.

Voelcker is dubious about using the eCrate in sedans because the battery pack is so wide and long. “Unless they start offering the motor, the power electronics, and different battery formats or individual modules, it’ll be a little limiting because you basically have to take that battery pack as is and figure out how to get it into your car,” Voelcker explains. “Most of the converters don’t use the full battery pack like that. They’ll open up the pack, take out the modules and put them in groups in different places in the vehicle.”

He thinks delivery vehicles that are larger than passenger cars might be a better fit for an eCrate conversion.

As kits and new EV production gain traction, DIY conversions in home garages appear to be losing their appeal. Keith Poncher, co-founder of the Michigan Electric Auto Association, noted that in the period between 2008 and 2010, as many as 80 converted vehicles showed up for an event but at a recent pre-pandemic get-together, just one DIY conversion turned out.

Poncher owns a 1974 Fiat X1/9 that was electrified by a solar energy technician in Southern California. He works for an Italian brake manufacturing company in Michigan that is owned by ITT, and for years Poncher drove the Fiat on his 30-mile commute to work. It was in a lab at work when some Italian executives were in town and “when they heard about it, they had to leave the meeting they were in at the time to go check it out,” Poncher recalls. “They were blown away.” The Fiat is now more of a weekend vehicle; he drives a Tesla Model 3 Performance to work.

Bob Gurk was a member of the Michigan group. A retired Ford employee who worked on the assembly line building dash panels, he now lives in Kentucky. Gurk decided to electrify a two-door Saturn Coupe after watching a biting 2006 documentary titled Who Killed the Electric Car? His vehicle had lead acid wet batteries in the trunk.

“I drove it for about three years but the range [44 miles] was disappointing,” says Gurk. “I’m still a total supporter of electric vehicles.”

Gurk now drives a C-Max Energi, a compact plug-in hybrid. He has owned a ‘65 Chevy Impala for more than 20 years that is currently sitting in his barn in Kentucky, which he hopes to restore.

Perhaps the Michigander with the most unique electric vehicle is Jack Beatty, an antique car enthusiast who owns two Detroit Electric EVs made in 1916 and 1925. There are an estimated 300-plus antique electric cars in the US.

“I’m an electric nut,” says Beatty, who still works in the hard chrome plating industry at the age of 87. He would like to drive a modern EV but because he has to have a workhorse capable of towing his Detroit Electric cars around the Midwest, he drives a Ford Expedition.