with CLIPREVIEWED learn the articleThe Best Laptops of CES 2021

CES 2021 may have been an entirely virtual show, but that didn’t stop the announcements from coming thick and fast. It was dominated by PC news, and manufacturers announced quite a few new laptops across many categories. The major impetus for all these new machines was three things: silicon, silicon, and more silicon.

One or more of three new component-platform launches drove all this innovation: Nvidia’s GeForce RTX 30-Series GPUs, Intel’s “Tiger Lake” Core H-Series and vPro processors, and AMD’s Ryzen 5000 “Cezanne” CPUs are all coming to laptops. In sync with all that action, PC makers updated their most popular lines, overhauled others, and developed entirely new paradigms of product building off these offerings. Here’s a look at some of our favorites from the show, from gaming laptops to Chromebooks.

Spiffy, well-built Chromebooks are nothing new. Neither are AMD-silicon-based Chromebooks, which have appeared in laptops for a couple of years now, but mostly bargain-minded models. Bringing the two together, though, is an intriguing combo. To wit: the Acer Chromebook Spin 514, which takes an all-aluminum design and combines it with a special new class of Ryzen CPU. 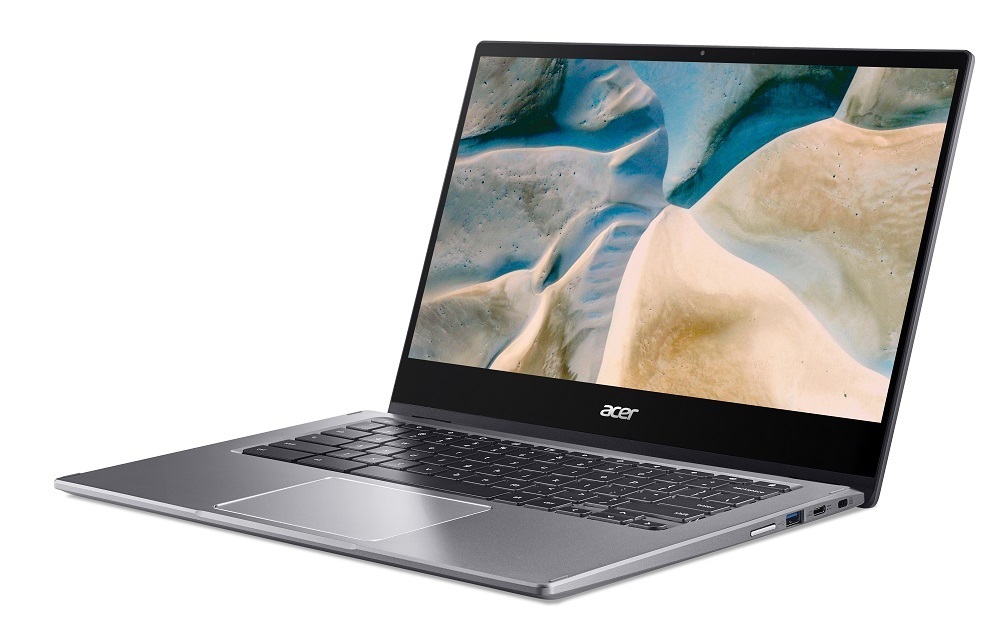 Earlier AMD-based Chromebooks employed the company’s decidedly bargain-basement A series of APUs (processors with built in graphics). In late 2020, however, AMD announced a series of mobile Ryzen chips, the 3000 C-Series, that were designed for Chromebook deployment. They aren’t on the same architectural generation as the latest Ryzen 5000 mobile CPUs announced at CES, but employ the Zen+ architecture and feature on-chip Radeon Graphics.

Coming in Ryzen 5 and Ryzen 7 flavors on this MIL-STD-durable Chromebook, the Spin brings the battle to the Intel- and MediaTek-based machines that dominate the Chromebook space. Plus, the Spin 514 comes in a business-focused version, the Chromebook Enterprise Spin 514, that will feature the Chrome Enterprise Upgrade, enabling the manageability and business aspects of Chrome OS for large-company IT and professional users.

The Triton 300 SE is a “special edition” update to the Triton 300, which fits between Acer’s budget-friendly Helios 300 and the more powerful Triton 500 in its gaming lineup. The standout draw, other than an appealing look, is that this is a 14-inch laptop—a rarity among gaming machines.

The internals see an overhaul, as well, offering GeForce RTX 30-Series (“Ampere”) GPUs and Intel “Tiger Lake” H-Series processors. These parts are paired with a 144Hz refresh rate display, letting you see the higher frame rates enabled by the new GPU. This all comes at a reasonable $1,399 price point. 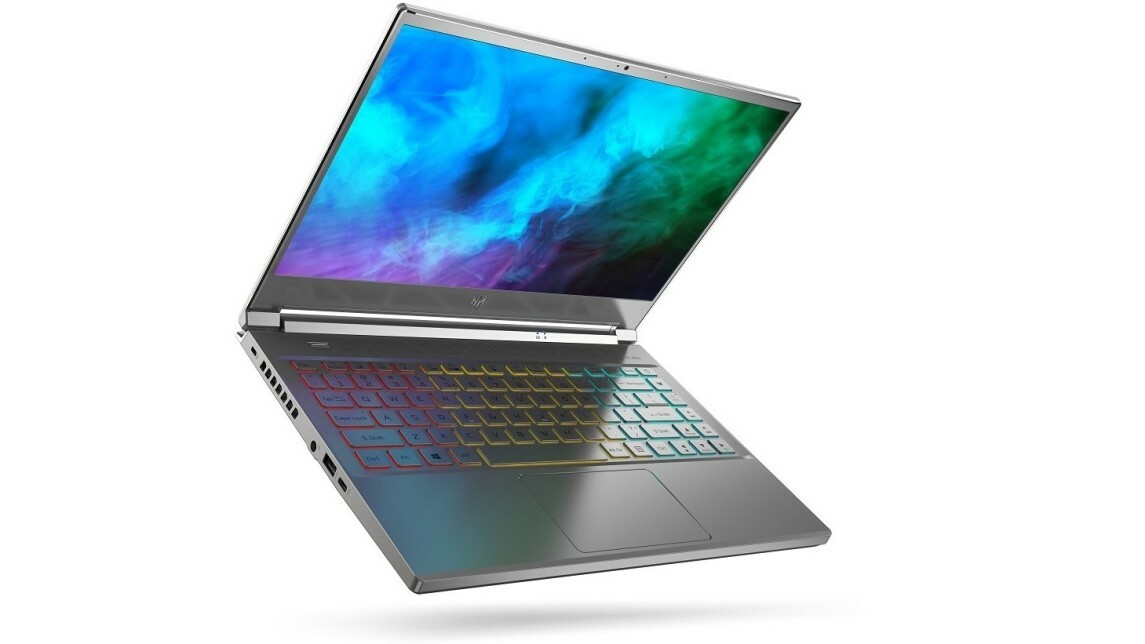 The screen size may be a bit smaller than you’re used to in a gaming machine, but the extra-portable design enhances the reasoning for having a laptop in the first place instead of a desktop. At 0.7 inch thick and 3.75 pounds, throwing it in your bag for a commute or trip (when these resume with regularity, at least) is easy. It helps that this update includes an attractive industrial design, doing away with the gamer-centric color schemes for a timeless silver.

The GeForce RTX 3060, while the entry point for RTX 30-Series GPUs, should be very capable for gaming. The GPU will make use of the high-refresh-rate screen, and being able to take all of this on the go easily should make gamers’ eyes light up. The combination of the price, the level of power, and the styling make this one of the most appealing mainstream-gaming packages we saw during CES 2021.

The Flow X13 is a 13-inch convertible (2-in-1) gaming laptop that measures just 0.62 inch thick and weighs 2.9 pounds. That’s almost unheard of in this category, but it only packs a GeForce GTX 1650 GPU as a consequence of its size. This is an entry-level GPU, one you may find in some general-use laptops that want to offer some 3D-graphics acceleration capability.

You may wonder why, then, it makes a good gaming laptop. The answer lies in its partner product, the also newly announced XG Mobile, a portable external graphics amplifier that can hold a more powerful GPU. When connected, the external GPU (eGPU) will power the laptop with its graphics instead, boosting gaming capability significantly. 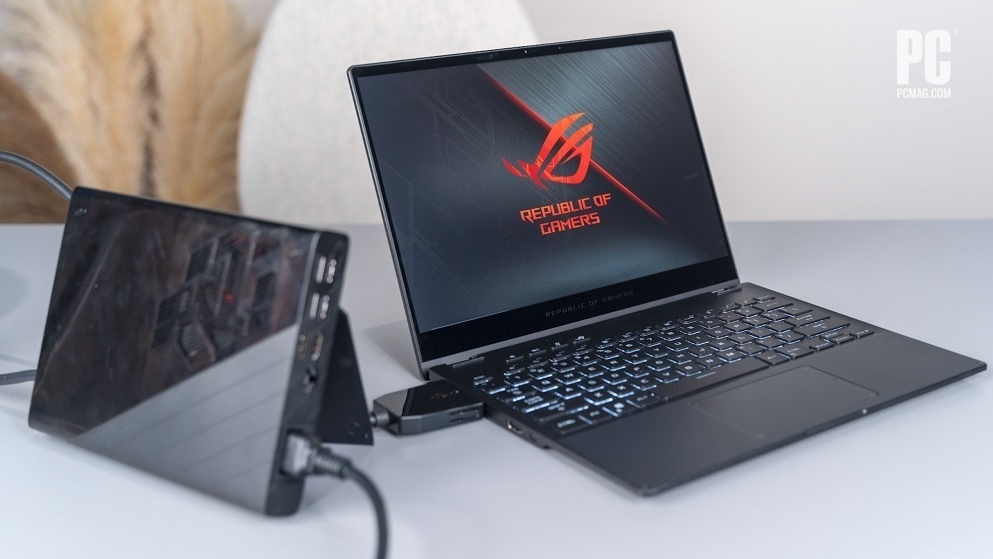 The concept of an eGPU is not what makes this product a standout; eGPU enclosures have existed for a long time. What’s cool is the portability of the pair, particularly the XG Mobile, which can contain up to a fully powered Nvidia GeForce RTX 3080 GPU despite being just the size of a book. The fact that the laptop, too, itself is slim and convertible makes this an unusual, but appealing pairing. 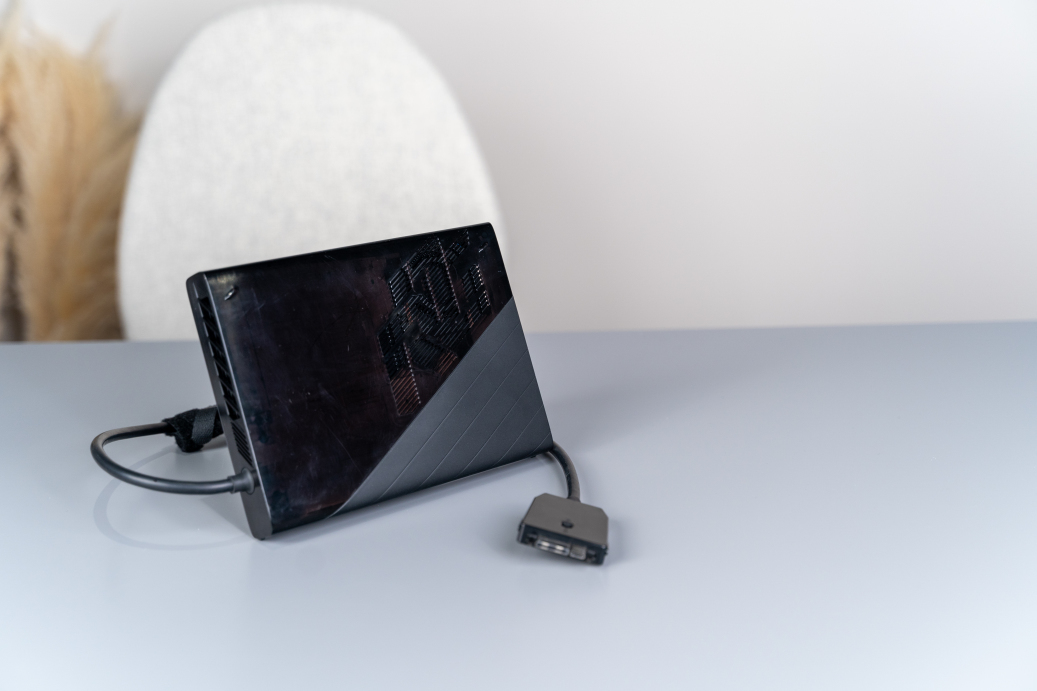 Normally your eGPU box (traditionally much larger than your average laptop) sits at home, waiting for you to return with your more portable laptop and power your games at your desk. With the XG Mobile, both could go with you on your travels, giving you a full gaming setup once you arrive at your destination. We’ll have to see how it holds up in practice (eGPUs have been known to be finicky), but with a proprietary port that should mitigate the usual performance loss between laptop and eGPU, and a stellar, compact design, this is a very appealing one-two punch.

The ZenBook Duo 14 is a two-screen laptop—a cool concept from the jump—that remains impressively portable at just 0.66 by 12.7 by 8.7 inches (HWD) and 3.53 pounds in spite of the double displays. This is not a wholly new product, but a refinement of a previous model that’s smaller and has brighter screens, faster performance, and more advanced software than before.

The 2021 edition can be equipped with either an Intel Core i5-1135G7 or a Core i7-1165G7 processor, up to 32GB of memory, and up to 1TB of SSD storage. The base model starts at $999.99, which is a pretty compelling entry point for such an advanced design. (There are some compromises associated with such a build, though, including a cramped keyboard and a narrow touchpad.) 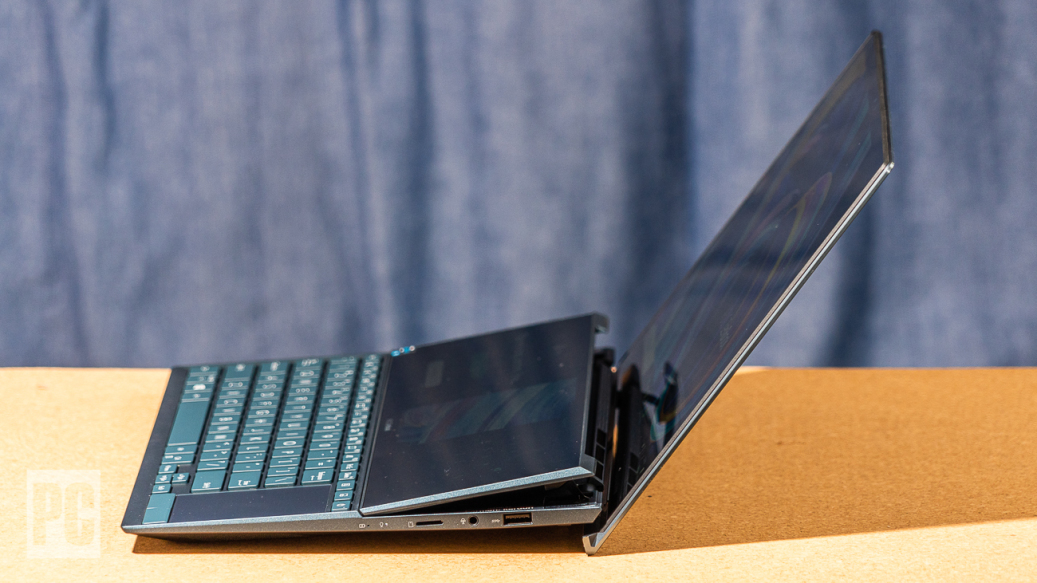 Well, have you looked at it? Even if the concept is not brand new, that is some impressive engineering, and it’s completely functional. As we noted in our hands-on piece, it successfully replicates the experience of a second monitor, albeit on a smaller scale. You can keep Spotify, your file navigators, or a reference spreadsheet open on the second screen at all times, and a number of software options in its launcher bring shortcuts and quick options to your fingertips. 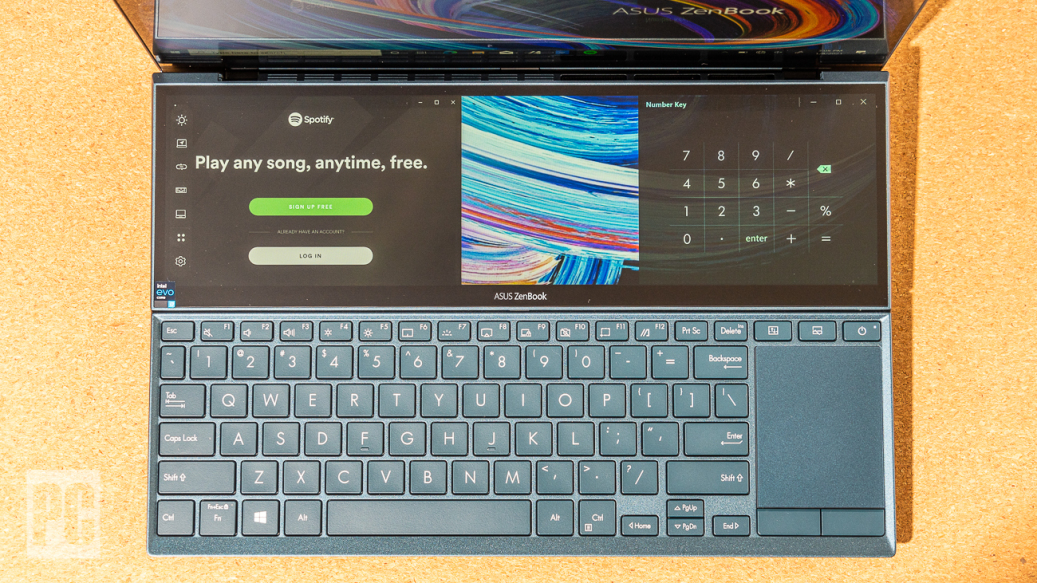 A key inclusion among those options is a customizable control panel for Adobe programs. This persistent touch menu can improve your workflow, leaving your most-used options and shortcuts a tap away and offering more screen real estate while you work than other laptops can. The main screen may not be too big, but a portable, multiple-screen setup for creative professionals is definitely appealing.

Leather-bound laptops aren’t entirely new; HP pioneered that concept a few years back in the HP Spectre Folio. (And laptops with wood? That was 2020.) But leather-bound 2-in-1s with a screen that pulls toward you? Okay, now we’re in uncharted, leathery territory. The idea here is that the screen pulls forward, allowing for an easel or stand mode as pictured here, or you can pull it all the way toward you, to flatten out the Folio as a tablet.

To be sure, the leather trimmings and the unusual convertibility are the key traits of this machine. But also interesting: the expectation of extreme battery life, and the option for wireless 5G connectivity. The Elite Folio is built on Qualcomm’s Snapdragon 8cx Gen 2 processor. While early Snapdragons were at times sluggish and worked through emulation with many key programs, the 8cx Gen 2 shows promise while also enabling the slim Elite Folio to run fanless.

The ThinkBook Plus as a concept isn’t new at CES 2021; the original actually debuted at CES 2020. But the idea certainly stands alone: a small-business-oriented laptop that has a monochrome, power-sipping E Ink screen on the outside of the lid, back-to-back with the ordinary LCD panel.

The big idea here is that the outer screen, like an oversize Kindle, can be used for quick-check or deep-immersion tasks: looking at email, peeping at the weather forecast, reading longform text. The big improvement in 2021, though, is that Lenovo has upped the E Ink screen’s size from 10.8 inches to 12 inches. This outer panel also features a higher native resolution of 2,560 by 1,600, the same resolution as the 13.3-inch inner (color) LCD. 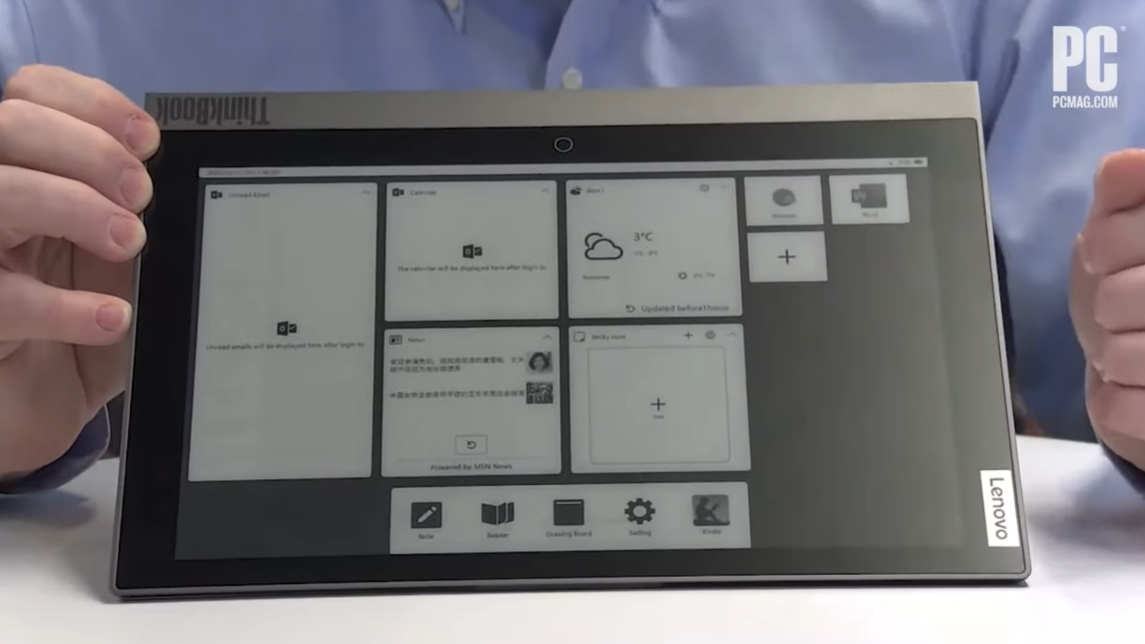 Models go up to 16GB of RAM, a Core i7 “Tiger Lake” 11th Generation processor, and a 1TB PCI Express SSD. Also enhanced, and important in these days of endless Zoom calls for many folks: an four-mic array for more voice clarity in video and audio calling.

A cutting-edge Windows tablet for the corporate jet-setter, the ThinkPad X12 Detachable bears a resemblance to the long-running, if niche-focused, ThinkPad X1 Tablet that Lenovo discontinued a while back. As a corporate-focused, manageable detachable 2-in-1, the ThinkPad X12 fills that same need, providing a keyboard base that is peerless to type on for what it is, along with a business-rugged design and support for vPro features if you need them. 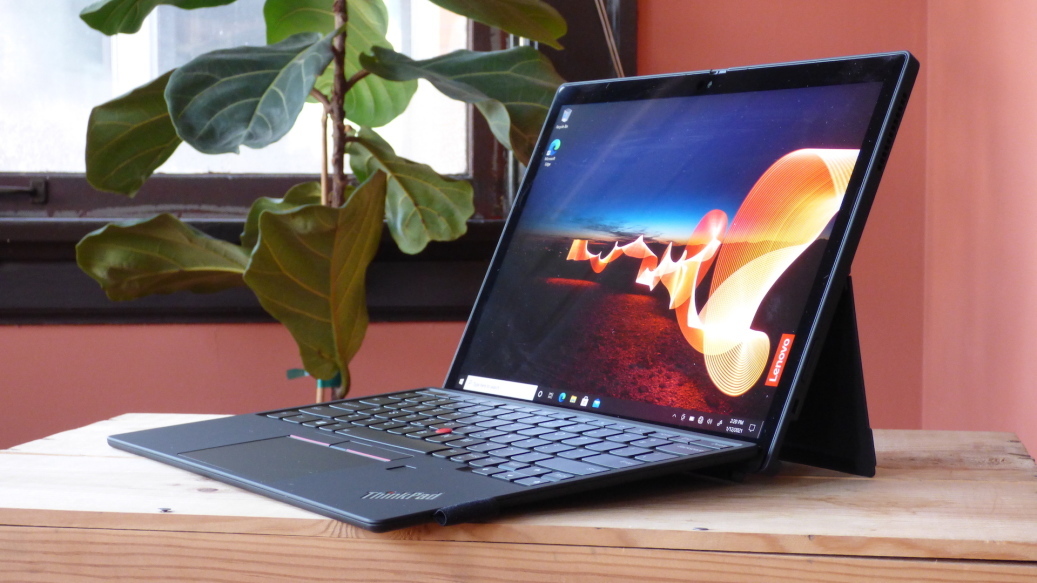 The crucial things to note with any detachable Windows-based 2-in-1 are the usability of the keyboard (we suspect you’ll be using the keyboard in Windows more often than doing simple tablet screen-poking) and the peak performance potential. The latter is important since you can’t stuff a lot of high-powered components behind the screen, in what is essentially the crowded half of a conventional laptop. 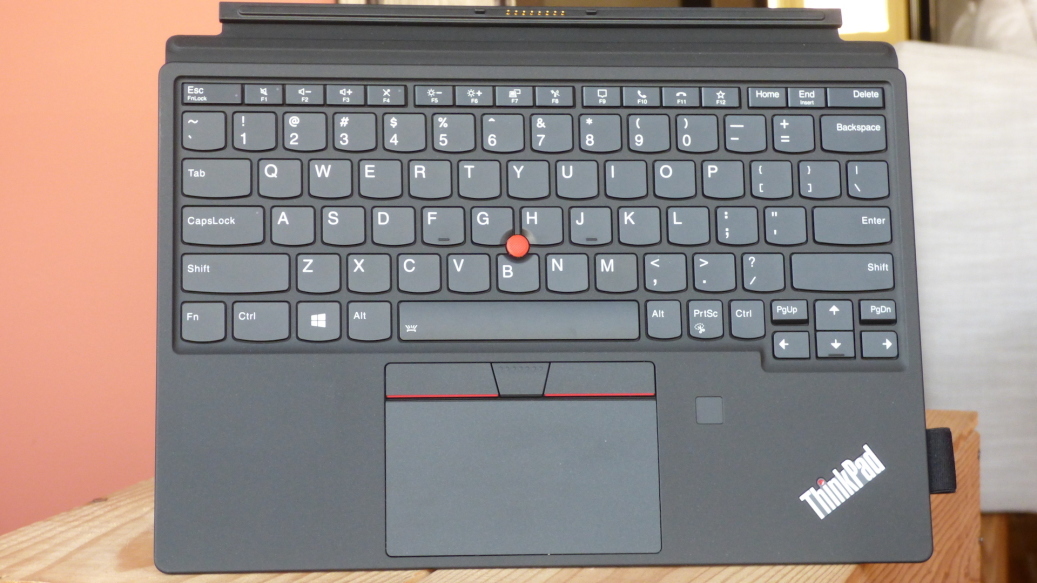 The 12.3-inch-screened X12 Detachable delivers on both scores. The keyboard portion is comfortable to type on, which is no mean feat in a thin, snap-on-and-off keyboard. (It beats the feel of the Type Cover keys on the seminal Microsoft Surface Pro 7, for one.) As for the 0.35-inch-thick screen half, it features a bright 3:2 panel and in the sample we test-drove, came with an 11th Generation Core i5 and 16GB of RAM. No slouch there.

The GeForce RTX 30-Series GPUs introduced at CES 2021 are going to bring new levels of raw frame-pushing power to gaming laptops, and when paired with the newest Intel and AMD power CPUs, they’ll be a force multiplier. Take, for example, the Stealth 15M from longtime gaming-laptop specialists MSI. This is an MSI sideline from its usual beefy gaming-laptop beasts, an ultraportable gaming model.

At comfortably under 4 pounds (3.75 pounds, to be exact), the 15-inch-screened Stealth 15M starts at $1,399 and brings on some major muscle for a trim machine. We outlined the Acer Predator Triton 300 SE above, but note that that machine is a 14-incher. This one is has an expansive screen and lots of connectivity in the right places.

For starters, a big screen, a light carry weight, and lots of power. (Not to mention, a 0.63-inch thickness measure.) The Stealth 15M features a Core i7-11375H processor, part of the “Tiger Lake” Core H-series just announced during CES 2021. (The previous-gen Stealth used an Intel U-series chip.) It also includes an RTX 3060 GPU (here, the Max-Q flavor), 16GB of memory, and a 512GB SSD. Some SKUs will use PCI Express 4.0 SSDs. That is a healthy loadout for machine of this weight class. You also get a choice of white or black models, with the latter in an aluminum body. 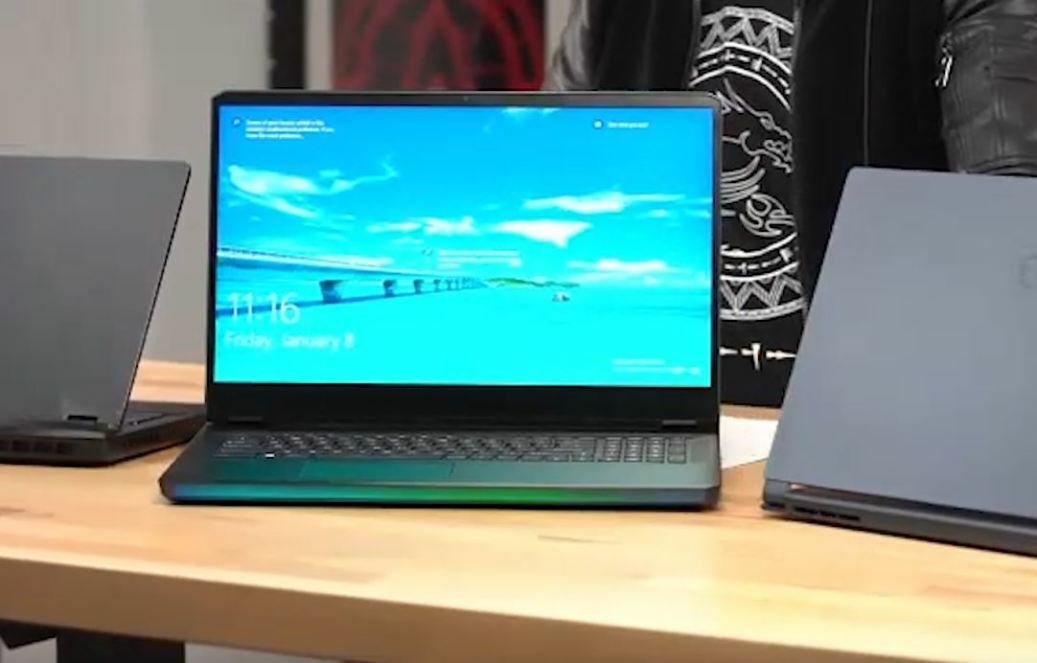 The key thing here, especially, is the new Tiger Lake H35-class CPU in a laptop this trim and light, which also means support for Thunderbolt 4 and over-USB-C power delivery. You can equip this model with a compact power adapter for easy on-the-road recharges without having to carry the full-size brick (though you’ll need the big one for serious gaming).