with CLIPREVIEWED learn the articleThe Advantages of a 5G Laptop

As I look at new enterprise laptops, I’ve been thinking about which options corporations might want. One that comes to mind is mobile broadband or WWAN (wireless wide-area network)—in other words, cellular connectivity, particularly 5G. LTE options on enterprise laptops are fairly commonplace, but 5G is now starting to roll out.

There are several reasons why you might consider a cellular option. One reason may be convenience – Wi-Fi connectivity works only where you have Wi-Fi, which is typically a limited area. Cellular service, whether 4G or 5G, typically is available in a lot more places, so you can use it while on a train or in the back of a cab. You could use a smartphone as a mobile hotspot, but that’s awkward and takes battery life from the phone.

Then there is security. We’ve heard a number of stories about Wi-Fi spoofing—particularly in places like airports, hotels, and coffee shops—where a “man-in-the-middle” attack captures information transmitted over Wi-Fi before passing it on to the Internet. That’s much harder to do with today’s cellular connections. (Note I didn’t say impossible.)

One of the first machines I’ve seen with 5G connectivity is the Dell Latitude 9510. I’ve written about using the laptop before. I found it to be a well-made 15-inch laptop with a Comet Lake processor and particularly good battery life and some nice new features (presence detection called Express Sign-in and noise-cancelling microphones.) On my first unit, I got mixed results on benchmarks. To test 5G, I got a new unit with the same basic configuration. It scored more in line with what I expected. (In particular, the first unit was particularly slow at running a big Excel spreadsheet I use. It took 88 minutes; the new one took 56 minutes—not the best I’ve seen, but in range.)

With the 9510, there are options for 5G with either AT&T or Sprint, which adds about $420 to an already high-end laptop, so this is a solution mostly for executives or others whose communications are particularly sensitive. I used a model with Sprint connectivity, which nowadays means I was using T-Mobile. 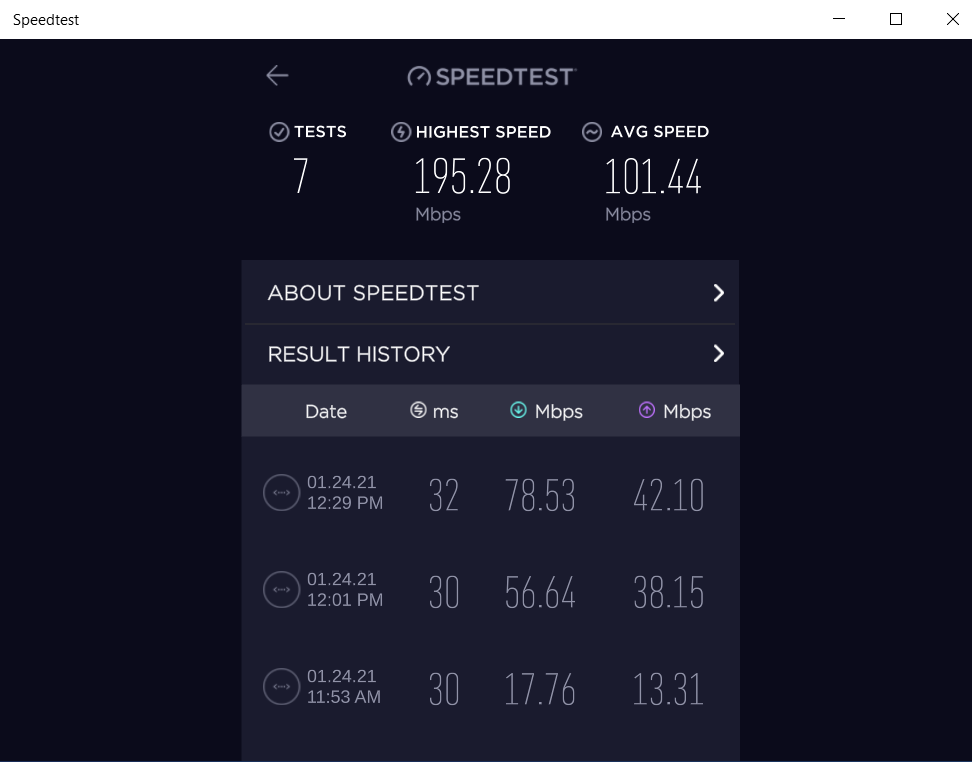 As always with cellular connectivity, speeds depend on where you use it. At my home, I got download speeds ranging from 110 to 195 Megabits per second (Mbps), and 17 to 35 Mbps up, which is perfectly acceptable for most kinds of business computing, including video calls. In downtown Stamford CT, my download speed dropped to around 50 Mbps, slower but still good enough. I found other locations where I supposedly had a 5G signal, but had download speeds limited to under 20 Mbps.

That’s a function of coverage. T-Mobile has more “mid-band” 5G than the other carriers, and my guess is that this is what I was seeing in the faster locations. (Although with other devices, I’ve seen speeds close to that with T-Mobile’s LTE Advanced service). Where coverage is less good, though still present, I got the slower speeds—probably using low-band spectrum.

The only other 5G notebook I’ve used so far is the Lenovo Flex 5G, which runs on a Qualcomm processor and connects to Verizon’s network, which doesn’t yet offer 5G where I live. Connected to LTE, I got speeds of 40 to 50 Mbps up and down near home.

Of course, LTE connections are less expensive. Dell offers LTE connectivity on some of its less expensive Latitude models for under $150. Depending on where you are, it may not be quite as fast, but that’s good enough for most uses.

If you buy 5G now, you will likely get a bit of speed improvement, but more importantly, you’re buying into a technology that should get better in the future, as we see more deployments.

Cellular connections in general, and 5G in particular, aren’t yet mainstream for most laptop buyers. But when the pandemic is over, and we start travelling again, I can see this becoming more and more popular.