T-Mobile today launched its first dedicated hotspot for its 5G network, and although it isn’t targeted at home internet access, it has a 100GB service plan that looks better than any other carrier’s plan for people who want to stay connected at home.

The new Inseego M2000 hotspot supports low, mid and high-band 5G as well as 7-band aggregation on T-Mobile’s 4G LTE network. Inseego says it got up to 2Gbps in field tests, although for most people on T-Mobile’s mid-band 5G network, we’d expect speeds around 300-500Mbps. Rural users on T-Mobile’s low-band 5G network will get LTE-like speeds.

The carrier appears to have just rebranded a combination of its mid-band, 2.5GHz 5G and its high-band mmWave 5G as “Ultra Capacity,” so if you see that phrase, that’s what it means.

The hotspot comes with some compelling service plans. The killer one is a 100GB plan for $50, “for a limited time” starting Dec. 13, which is far more hotspot data than AT&T or Verizon offer at that price point. That’s enough to help keep the whole family connected for up to 320 hours of video calls, notes T-Mobile.

What happens when you go over your hotspot data allotment is a little unclear. T-Mobile’s fine print implies that you get throttled to 2G speeds, but it also implies in the same paragraph that you get 4G speeds, but they’re deprioritized. The hotspot plans may also not be good for watching Netflix because they degrade video quality, if T-Mobile’s fine print is correct.

“During congestion, customers on the $50 hotspot plan may notice speeds lower than other customers and further reduction if using >100GB/mo. (>50GB/mo. for other hotspot plans), due to data prioritization. Video typically streams at DVD quality (480p). Mobile hotspot plans include high-speed data up to allotment, and then max 2G speeds.” 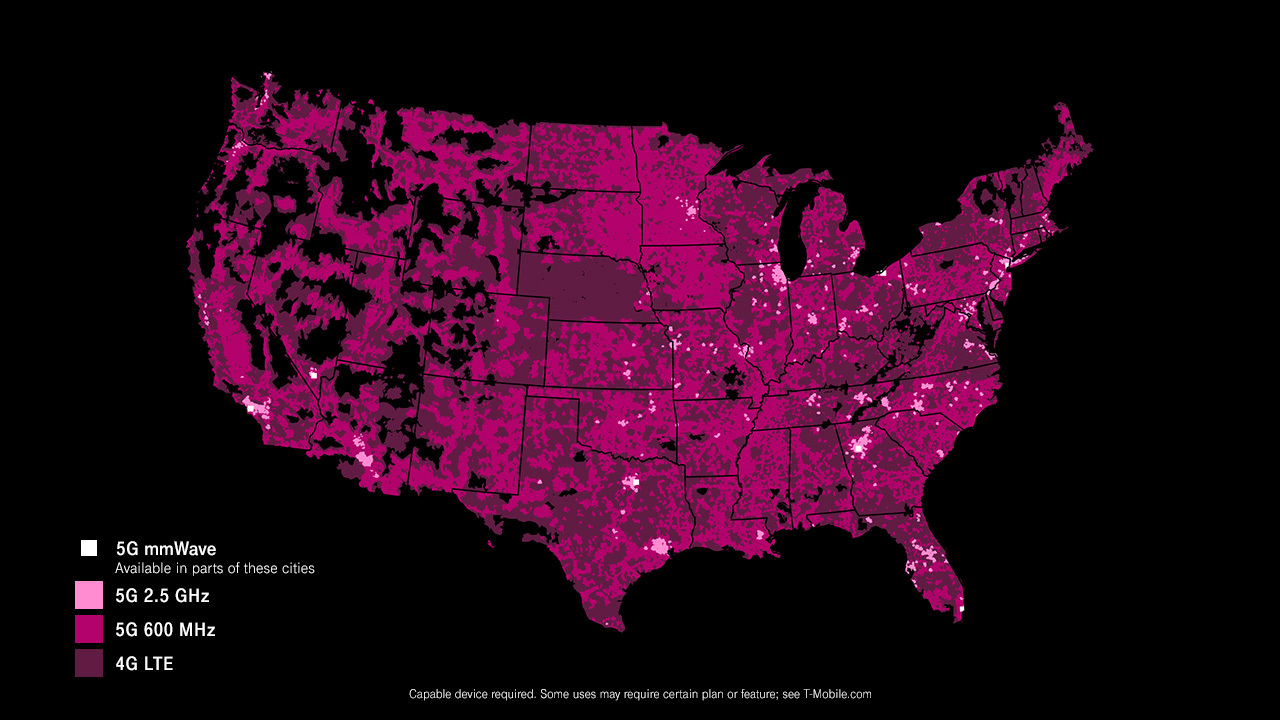 T-Mobile’s 5G coverage map shows where it has low, middle, and high-band 5G, but doesn’t let you zoom in.

The hotspot can also be added to a T-Mobile unlimited family plan, in which case it would receive unlimited data that is de-prioritized after 50GB.

The device itself costs $336, but will be sold for half off with a two-year commitment.

As seen on Inseego’s Web site, the M2000 is physically similar to the M2100, which we tested for Verizon (and is shown above). It’s a long, black rectangle, weighing 7.4 ounces, with a touch screen on the front and a large 5,000mAh removable battery. It can connect up to 30 devices using Wi-Fi 6.

It immediately outpaces T-Mobile’s other hotspots, which until now have generally only included the slowest possible, Category 4 LTE modems. Even in a 4G-only mode, the M2000 should be up to 10 times as fast.

This device, and its service, is separate from T-Mobile’s 4G Home Internet plan, and from any upcoming 5G home internet system the carrier will launch. The T-Mobile home internet system costs $50/month and has truly unlimited data, but it’s only available to about 20 million households scattered around the country. It uses a larger home router that isn’t meant to be moved around.

We will have a review of the Inseego M2000 soon; it goes on sale today.