with CLIPREVIEWED learn the articleScalpers Rake in $43M by Selling PS5s, New Graphics Cards on eBay

Scalpers on eBay may have collectively earned over $43 million in profit by reselling new PlayStation 5 consoles and next-generation PC graphics cards to desperate consumers.

The estimate comes from a Chicago data engineer named Michael Driscoll, who created a computer script to track eBay sales and plot them on a graph. On Monday, he told PCMag the findings show scalpers have made an estimated $92 million in sales and $43.7 million in profit since September by hawking 14 different products, including AMD’s Ryzen 5000 CPUs. 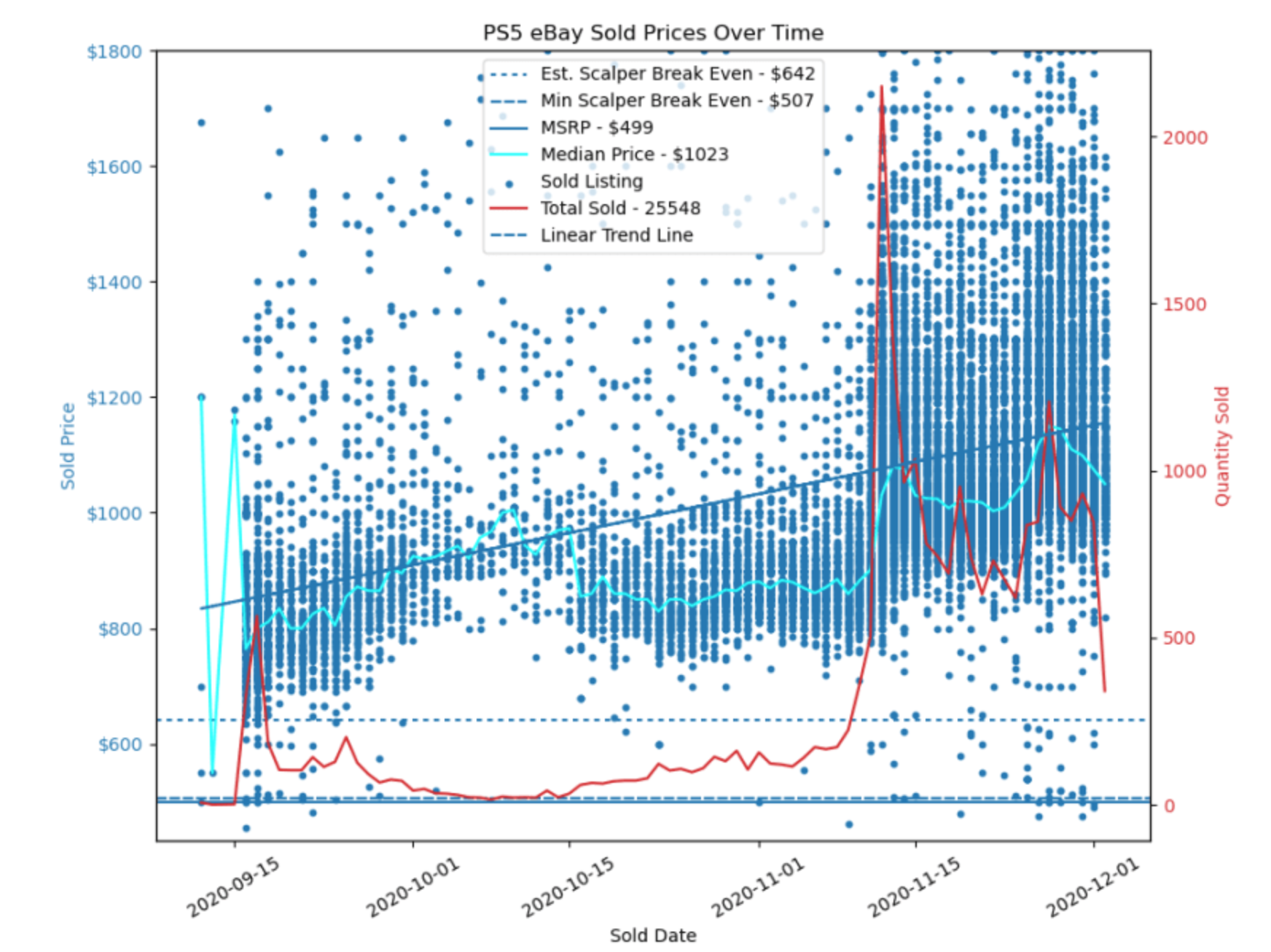 It’s no secret that scalpers have been reselling the items for twice or even three times their normal price. However, Driscoll’s analysis, which was first posted last week, indicates thousands of buyers have been willing to pay the high prices.

For example, scalpers have sold at least 32,000 PlayStation 5 consoles on eBay, according to his computer script. The median prices have reached $937 for the digital PS5 and $1,021 for the disc-based version—or over twice the normal cost.

Demand has also been high for the new Xbox. Close to 30,000 units have been sold on eBay, although the median pricing for the Series X has been at $865 while the Series S has only reached $469.

On the graphics card front, scalpers have sold 15,224 units of Nvidia’s RTX 3000 series with the bulk of sales occurring for the RTX 3080. Meanwhile, sales for AMD’s new GPUs, the Radeon RX 6800s, have only reached over 450 units. 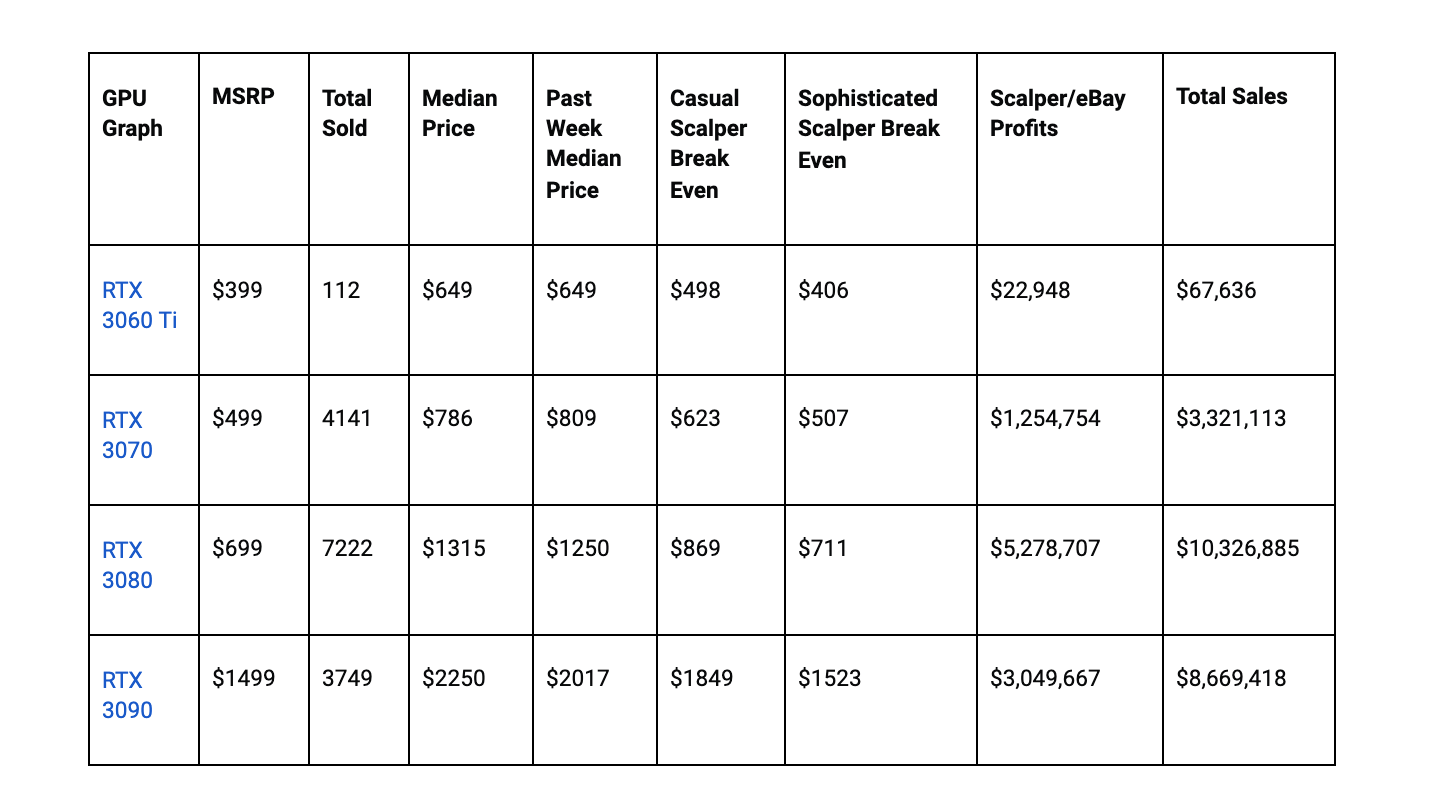 The estimate from Driscoll’s analysis is likely a conservative one; his computer script only tracks eBay sales in the US, and doesn’t account for other activity occurring on Facebook Marketplace or Craigslist. So the scalpers are probably making significantly more in sales, although eBay will also take a 10 percent cut of the revenue.

In a Reddit post, Driscoll also pointed out he’s only tracking sold listings on eBay—not currently active listings. In addition, he’s been filtering out suspected fake sales by removing listings that were too low or far too high above the normal pricing. 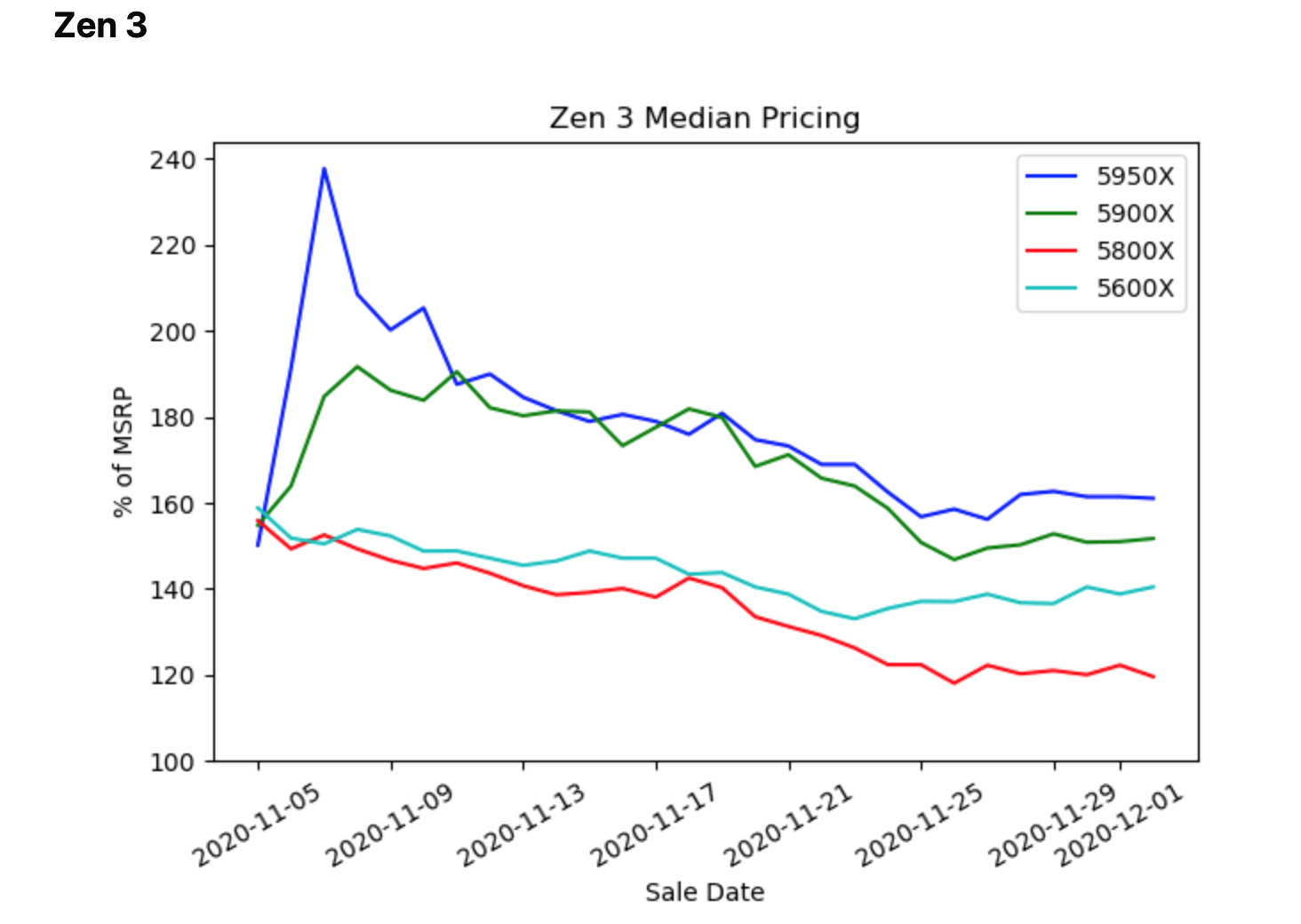 Unfortunately, limited supplies are expected to persist into early next year. The only good news for consumers is the pricing for AMD’s Ryzen 5000 chips have started to fall on eBay. “All of the CPUs are on a downward pricing trend, with the 5800X recently below the break-even point for casual scalpers,” Driscoll wrote. “Likely the casual scalpers will stop buying new 5800Xs soon and try to sell off their stock.

If you want to score the products without paying a scalper, we suggest you try an inventory-checking service, which can immediately alert you when a retailer has new stock of the item.