with CLIPREVIEWED learn the articleNo Heat? Get Your Landlord’s Attention With Cold, Hard Data From This Tiny Sensor

The number one housing complaint in New York City during the winter months is a lack of heat. But tenants there can use a tech tool to get action from their landlord: a web-enabled thermometer about the size of a small box of raisins.

A tiny nonprofit called Heat Seek NYC created the inch-thick device, which uploads data to the cloud that can be used in court or to pressure landlords to settle legal actions, according to tenant attorneys. The sensor’s hourly temperature readings can be viewed online by tenants and downloaded as PDFs. Times when the heat is below the legally mandated minimums show up in red, and the total hours of violation are tallied. 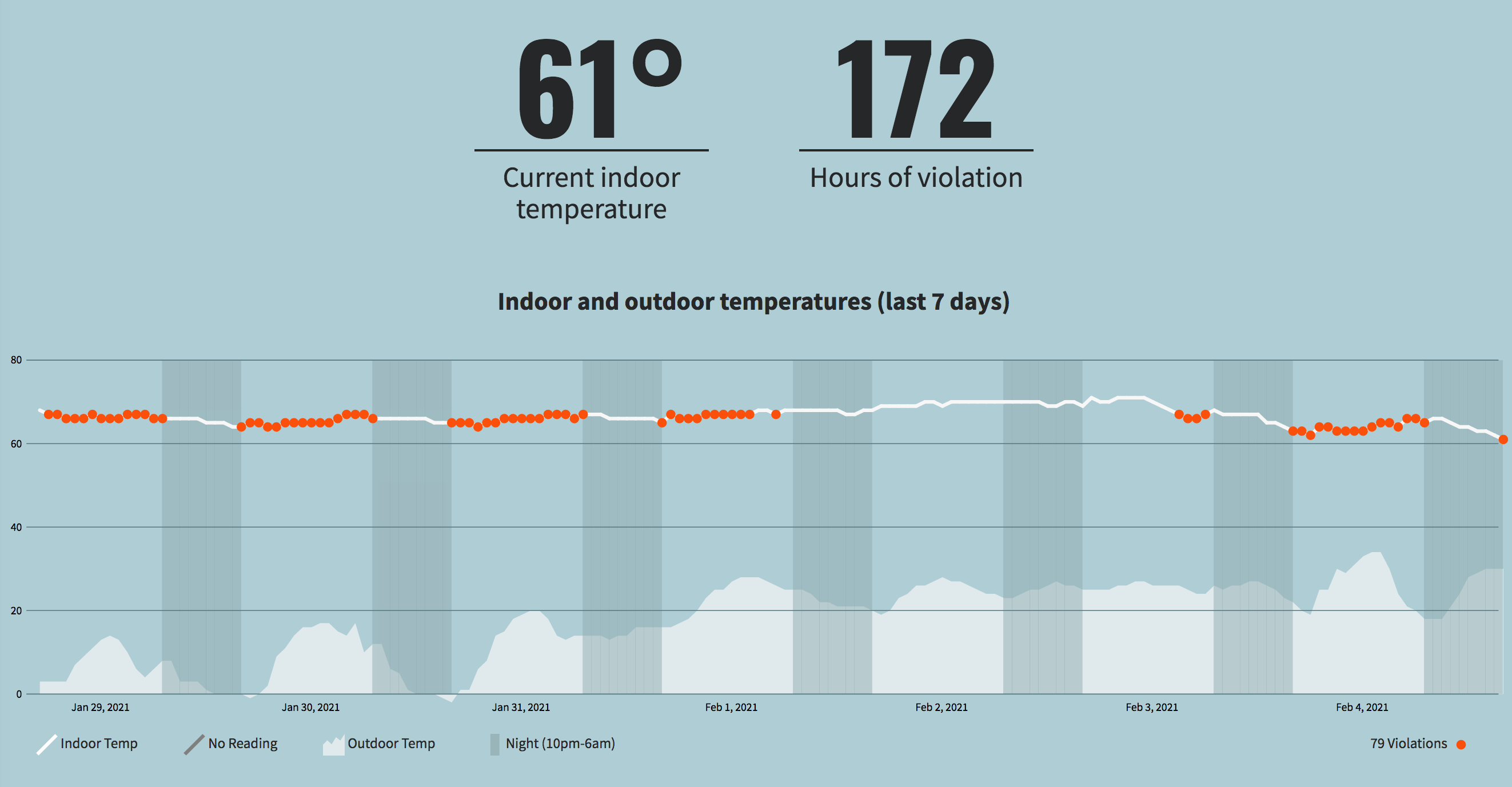 The Heat Seek sensor sells for $69.99, though a limited number of tenants who meet income-eligibility requirements can get them for free, and don’t have to pay a monthly $7.99 charge from Oct. 1 through May 31.

During those colder months, if the outside temperature falls below 55°F, landlords are required to heat apartments to at least 68°F between 6 a.m. and 10 p.m. Between the hours of 10 p.m. and 6 a.m., the inside temperature must be at least 62°F. When the indoor temperature drops below 65 during the daytime hours, tenants get a text from Heat Seek saying, “Consider calling 311 and moving to a warmer location.” 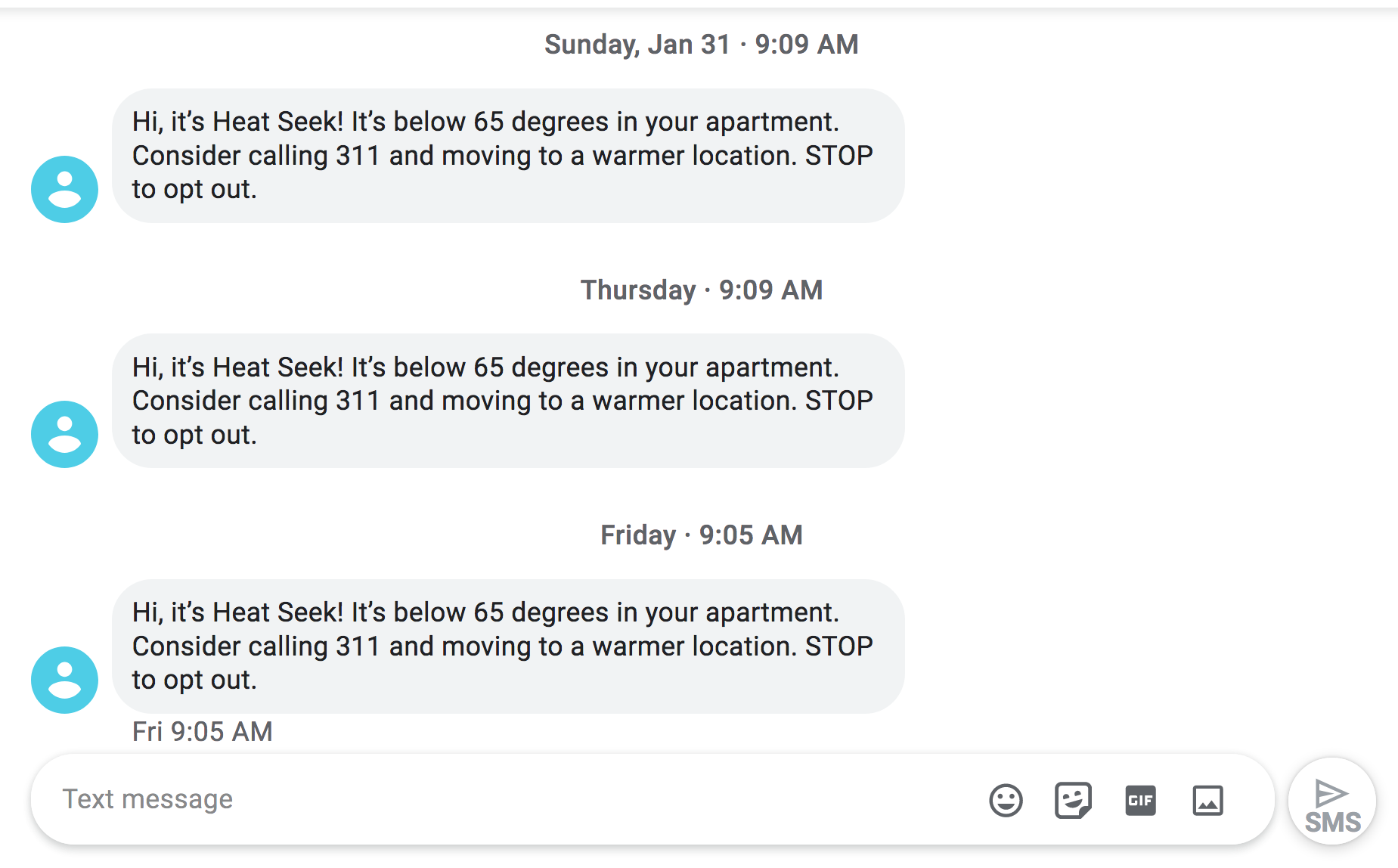 Heat Seek NYC was founded in 2014 by Noelle Francois and William Jeffries, who met as undergrads at William and Mary College in Virginia, and shared the experience of not having enough heat in their homes during college and afterwards.

The prototype for the sensor was created by Jeffries and Tristan Siegel, who both studied at NYC’s Flatiron School. The device and software won big at the 2014 NYC Big Apps competition, garnering $25,000 in prize money. The following year, the Heat Seek team raised $15,000 on Kickstarter.

“It was extremely easy to start detecting heat violations,” says Jeffries, who worked as an accountant before making a career pivot to software development. 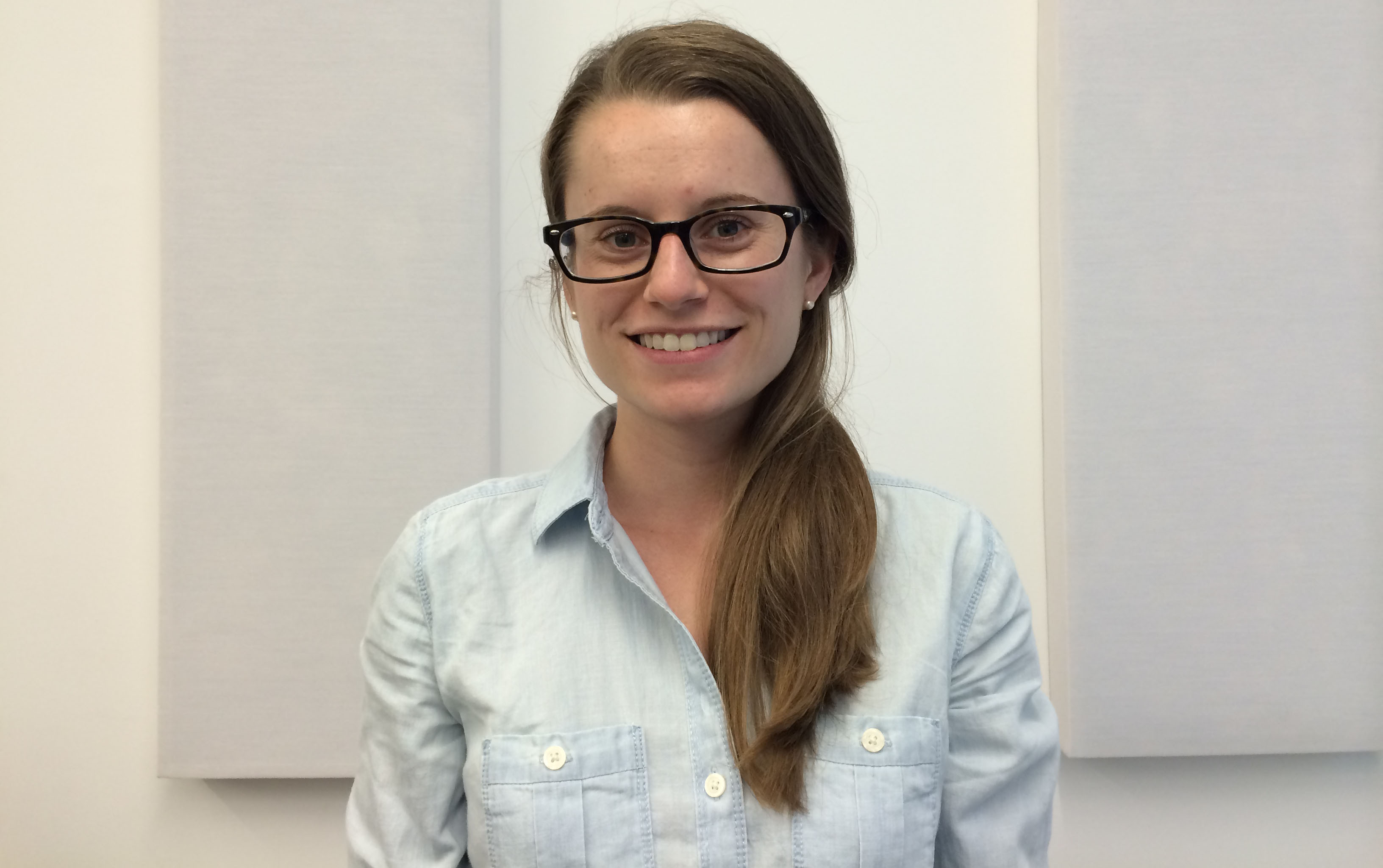 There have been three iterations of the Heat Seek hardware. The earliest prototype used a $150 off-the-shelf sensor called Twine, made by a Texas start-up called Supermechanical. But it was deemed prohibitively expensive and only worked with Wi-Fi.

“We work with elderly tenants that don’t use computers,” notes Francois, who now serves as Heat Seek NYC’s executive director. “It was really important to us that we were able to work with those folks regardless of whether they have Wi-Fi or not.”

Heat Seek made its own units for the second iteration, which included printed circuit boards, a temperature sensor, and a wireless connectivity module slightly larger than a quarter. Those units communicated their data via radio signal to a Raspberry Pi that served as a central hub. But the radio signals didn’t travel well in old buildings made of brick, steel, and concrete. So two versions of the device’s third iteration were built—one that connects to a tenant’s Wi-Fi and another with a modem and a SIM card that makes its own connection to the internet. Both models are now in use.

A 5-foot-long power cable connects the device to an AC outlet, and the temperature sensor is housed in a vented plastic case glued to the plastic container housing the circuitry. 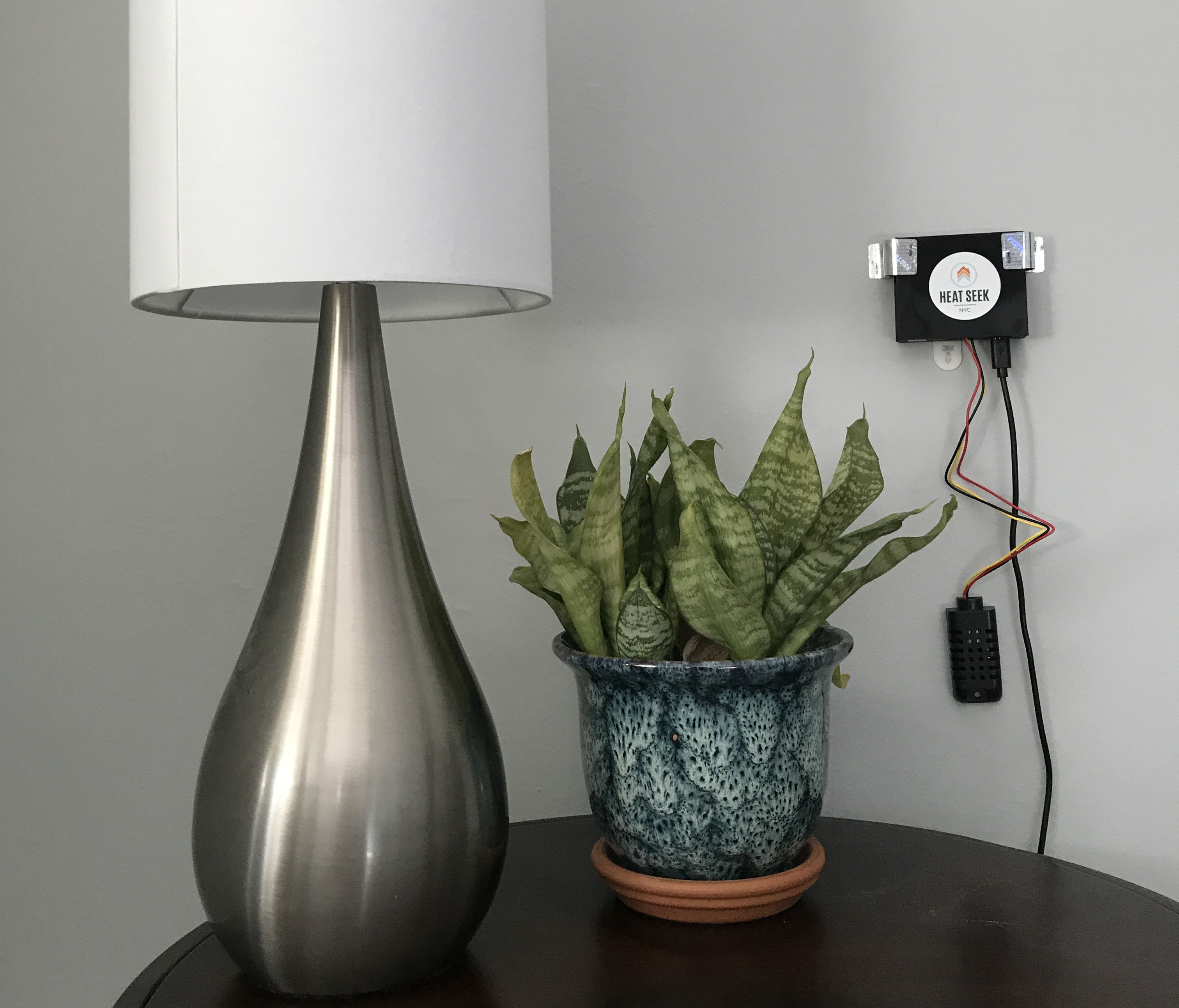 Heat Seek NYC has no office other than some desk space at tech incubator Blue Ridge Labs, but that facility is now inaccessible due to COVID. Jeffries served as CTO until August 2016, but Francois is currently Heat Seek’s sole employee. She has a master’s degree in public and nonprofit management—and some decent soldering chops. She works in her living room, soldering the wires connecting the temperature sensors to the Heat Seek’s main unit.

Heat Seek sensors are used inside 20 to 30 buildings each year, according to Francois. This winter, the sensors will be in 75 apartments, she says. Prior to the pandemic, Francois did all the installations, but tenants now have to install the device themselves. They are directed to attach the sensor to a wall 3-5 feet off the floor with foil tape that comes with the unit. Clients are advised not to place the sensor in a kitchen, bathroom, or near a space heater. 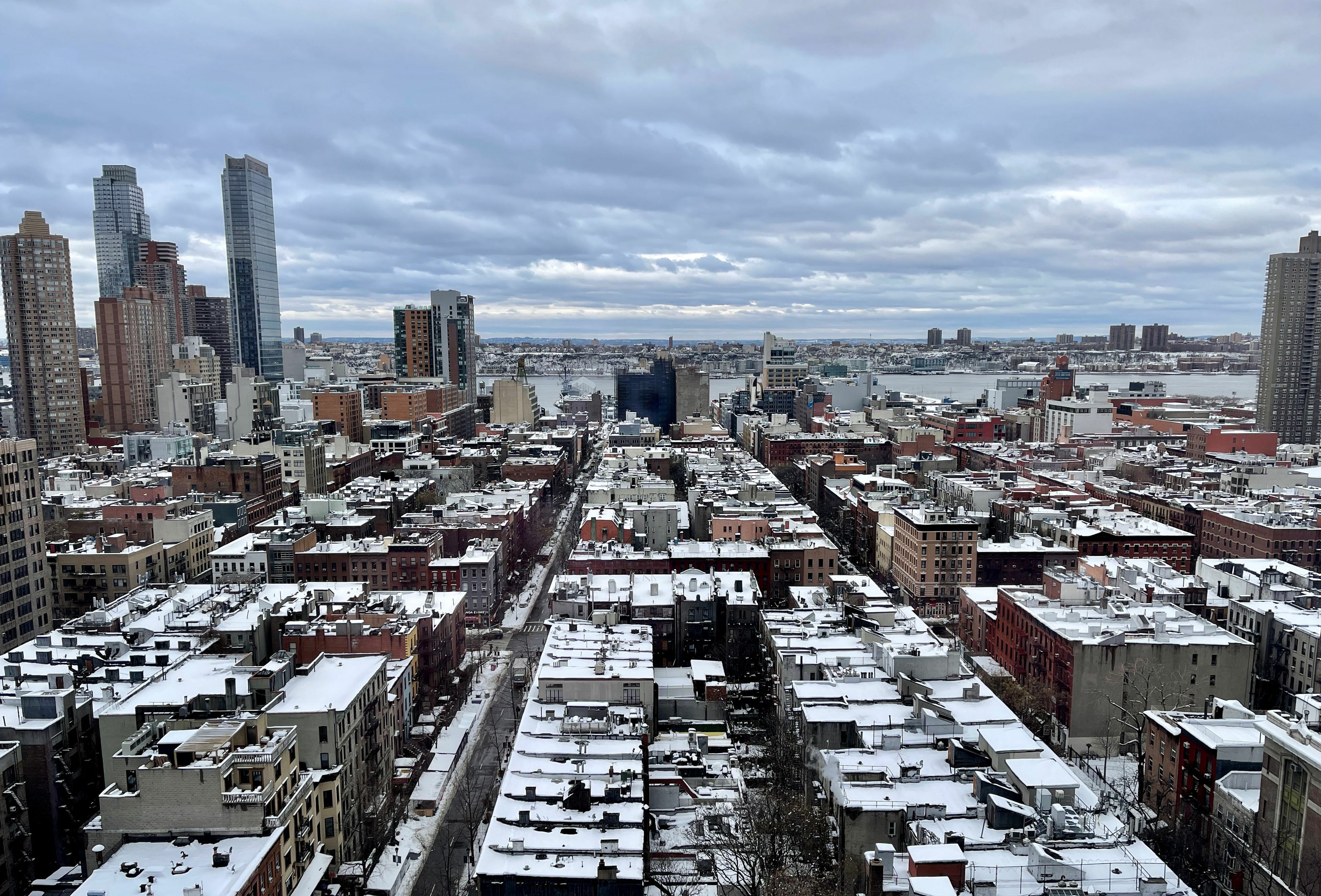 Jeffries uses the term algorithmic advocacy to refer to the use of technology to stand up for people, something he believes that Heat Seek NYC accomplishes.

“Right now what lawyers do to support claims, and this is what everyone does, is ask their clients to take a piece of paper and a pencil and, when they remember, write down the temperature and the time of day,” he says. “Then in court, the tenants testify that they took all that information down accurately and in good faith, [but] there’s a lot of room for bias and error.”

Stephanie Rudolph, now a supervising attorney at Communities Resist, a community-based law office, took an interest in Heat Seek NYC when the device was in the early stages of its development, and helped get it in the first buildings to start monitoring temperatures.

“The way the law is enforced, landlords can get away with providing inadequate heat or no heat at all for a significant period of time,” says Rudolph. “It takes a very proactive tenant who knows their rights and is home to let an inspector in at the right time to actually get a violation placed.”

Consistently tracking the temperature in their homes is an onerous task for tenants, says Edward Garcia, a community organizer with the Northwest Bronx Community & Clergy Coalition. Ditto for calling the city’s 311 line and filing a complaint about a lack of heat.

“People get tired of calling,” says Garcia. “If an inspector shows up at a time when there is some heat in the unit, [tenants] feel like it was a waste of time and get discouraged.”

Garcia cited one apartment he worked with that had a Heat Seek sensor in 2017. Tenant activists, he says, were able to leverage the data collected by the sensor into getting the local city councilman to put pressure on the building’s landlord to upgrade its boiler.

“That was a major victory for the building because the boiler needed to be upgraded to avoid the constant shutdown,” Garcia says.

Catherine Frizell, a housing attorney at Legal Service NYC’s Tenant Rights Coalition, is not aware of a court ruling based on Heat Seek data entered as evidence, but she credits the sensor with helping to win settlements for tenants. Tenants can also use the website to initiate an emergency proceeding in the city’s housing court for repairs and/or harassment.

“In litigation we’ve attached Heat Seek records to court filings, and the landlord has settled rather than go to trial,” says Frizell, who is representing three buildings with Heat Seek sensors this winter. Just knowing that their tenants are wired may act as an incentive for landlords to crank up the heat, she says.

“Prior to installing Heat Seek sensors, [my clients] would sometimes go without heat for weeks upon weeks,” says Frizell. “Since the installation of Heat Seek sensors and putting the landlord on notice that they’re installed, the lapses of not having adequate heat have decreased to a matter of several hours at times.”

For those who need help getting their landlord’s attention, JustFix.nyc offers a template for writing a letter about needed repairs, and will send it via Certified Mail to a landlord free of charge. At whoownswhat.justfix.nyc, meanwhile, tenants can learn about all the buildings their landlord owns, a service used by more than 200,000 unique users so far, according to Georges Clement, JustFix’s executive director.

The group just launched evictionfreeny.org to create and send hardship declarations to landlords and applicable courts in New York State. The hardship declarations are sent via email and Certified Mail, and will ostensibly put eviction cases on hold until May 1. JustFix has partnered with a California group called SAJE (Strategic Action for a Just Economy) to pilot these services in Los Angeles. 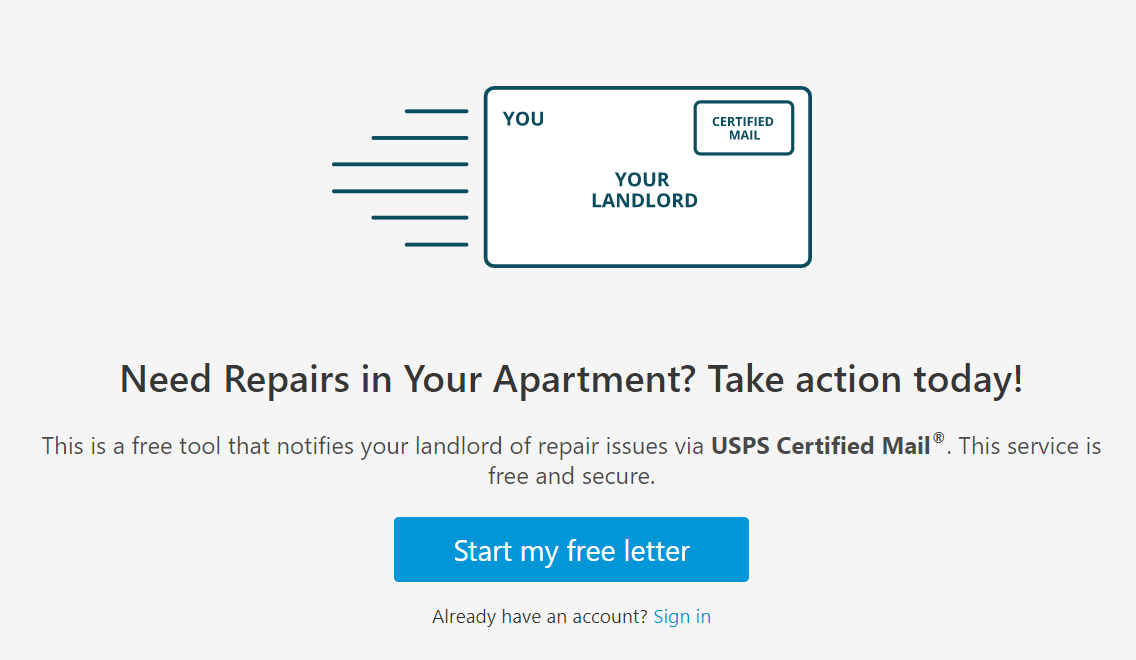 “Technology and data are not solving any of these issues directly,” says Clement, “but they are adding tools to help level the playing field.”

Like JustFix and Heat Seek NYC, Unlock NYC also got its start at Blue Ridge Labs. The group’s mission is to use tech to identify, document, and report housing discrimination, especially discrimination based on income. In New York, there are a dozen different types of vouchers, including those earmarked for people who qualify for federal Section 8 rent subsidies, as well as HIV+ individuals, and homeless families.

JustFix sends allegations of discrimination to the New York City Commission on Human Rights. It plans to release a phone recording web app before the end of the year to help catch a broker telling a prospective tenant over the phone that the landlord doesn’t accept vouchers.