with CLIPREVIEWED learn the articleIf You Buy an AMD Ryzen 5000 CPU, Make Sure You Keep the Box

(When building a PC, never throw away the boxes until you’re sure it works.)

Over the holiday weekend, PC desktop vendor PowerGPU made the explosive allegation, which set off flame wars in the AMD versus Intel debate. Wccftech was first to report the news.

To back up its controversial claim, PowerGPU supplied some circumstantial evidence. In a now-deleted tweet, the company said of the 320 Ryzen 5000 CPUs it’s received, about 6% ended up “dead on arrival,” meaning they didn’t boot up at all. 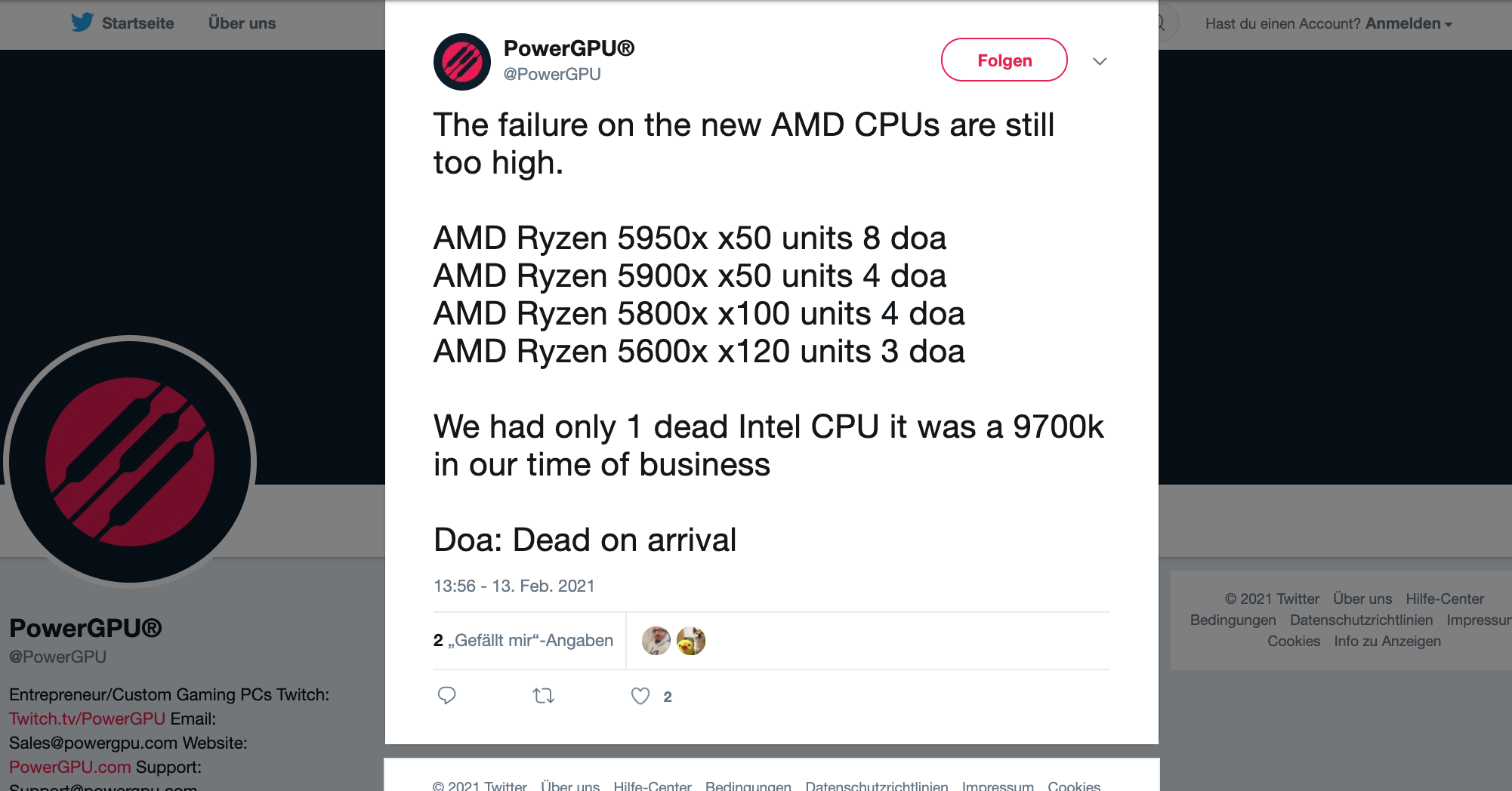 Six percent may not sound like a lot. But PowerGPU says it’s only ever received one dead CPU from Intel. In addition, the batch of Ryzen 5950X chips it obtained showed a higher dead-on-arrival rate of 16%.

“The failure on the new AMD CPUs are still too high,” the company added in the same tweet. On top of all this, PowerGPU also noticed stability issues with AMD’s Ryzen 5000 chips.

As you’d expect, the company has since faced a barrage of skepticism from the PC building community, where AMD’s Ryzen 5000 CPUs have been all the rage. Indeed, the company’s chips have dominated our rankings for the best CPU processors.

AMD tells us it’s investigating the claims from PowerGPU, but added: “We are unaware of any similar issues at this time.”

So what should consumers make of all this? The tweet from PowerGPU caught my attention because I snagged a Ryzen 5800X CPU in November, and it turned out to be faulty.

The CPU wasn’t dead on arrival, though. Instead, it caused repeated “Blue Screen of Death” crashes on the two separate B550 motherboards from Asus and MSI I tried the processor on. The errors were so bad they disabled the M.2 NVME SSD drives on both motherboards, preventing the PC from booting up Windows 10. (I later tried an older Ryzen 3600X chip on my rig, and my system worked fine.)

I wasn’t alone in experiencing the problems. Posts on Reddit and AMD’s own forums show many other customers have encountered similar crashing issues, dating back to November when the processors first launched. In some cases, the forum posts number in the hundreds, with users desperately searching for a solution.

Still, forum complaints aren’t concrete evidence of widespread problems. Even a few hundred angry posts are small when you consider AMD sold an estimated 1 million Ryzen 5000 CPUs last quarter. My advice: If you buy an AMD Ryzen 5000 CPU, don’t throw away the box it comes in.

In the event the CPU is causing persistent problems, you’ll want to return the product for a refund or replacement. Most vendors usually accept a return within 15 or 30 days, and will do so quickly. However, the seller you bought the processor from won’t accept the faulty product if you’ve thrown away the box. (Amazon seems to be an exception.)

It’s advice you should apply to any PC parts you buy. Unfortunately, I learned this lesson the hard way. Initially, the faulty Ryzen 5800X processor I bought worked fine for the first two days. So out of sheer arrogance, I threw away the box. The boneheaded mistake left me with no choice but to go through AMD’s warranty request system in an effort to receive a replacement. It was a painful process that took over five weeks to complete. During that time, I had to wait and respond to AMD’s emails, send the faulty CPU to the company, and then wait another two weeks for the CPU to finally arrive.

The good news is that my replacement Ryzen 5800X has been working great. I’ve not experienced one error since I installed it in my new PC.

As for PowerGPU, the company hasn’t said why it deleted the original tweet concerning the faulty AMD Ryzen 5000 CPUs. But in a new tweet on Monday, the vendor said it’s been working with AMD to test out the problems.

“I have said it before it could just be our batch or luck,” the company added in a follow-up tweet. “Others might not experience the same issues or at the same percent rate.”