with CLIPREVIEWED learn the articleAsus ROG Flow X13, a Slim Gaming 2-in-1 Laptop Amped Up With Its Own External GPU

Asus today announced the ROG Flow X13 and the ROG XG Mobile, a 13-inch convertible (2-in-1) gaming laptop that works with an extra-compact external GPU (eGPU). According to Asus, these two products can work together to deliver a powerful super-mobile gaming setup, though it’s important to note that the Flow X13 is capable as a laptop on its own. Despite its small frame, the Flow X13 can pack up to an AMD Ryzen 9 5980HS processor and an Nvidia GeForce GTX 1650 GPU. This is a product that bears looking at to understand. Though CES 2021 is entirely virtual, we worked with Asus to bring you as close to a hands-on experience as possible from afar. In the video below, we talk with Asus about the Flow X13 and the XG Mobile. This up-close look at the design and features should answer lots of the questions around this unusual pair…

Spec Check: A Super-Slim Laptop With a Rare Small eGPU

While most of the details are in the video, here’s a rundown of the fundamentals. The Flow X13 measures just 0.62 inch thick and weighs 2.9 pounds. That’s pretty portable for any laptop in its size class, but great for a gaming system. Granted, the GeForce GTX 1650 that the Flow X13 packs onboard is just an entry-level GPU, one you may find in some general-use laptops that want to offer some 3D-graphics acceleration capability. The Flow X13 is also a very rare convertible gaming laptop, bending into tablet and stand modes. You’ll be able to get it with a 16:10 display in one of two varieties: a 1080p, 120Hz-refresh-rate panel, or a 4K resolution screen. That’s where the XG Mobile comes in as its partner. This eGPU enclosure can contain up to a fully powered Nvidia GeForce RTX 3080 GPU despite measuring just 1.14 by 6.1 by 8.1 inches (HWD). Asus estimates this is about 6% of the size of standard eGPUs, and having tested some much larger eGPU boxes from the likes of Razer and others, I can confirm that this is much smaller than your average model. It’s cooled by a compact vapor chamber to keep it running within spec at its small size. 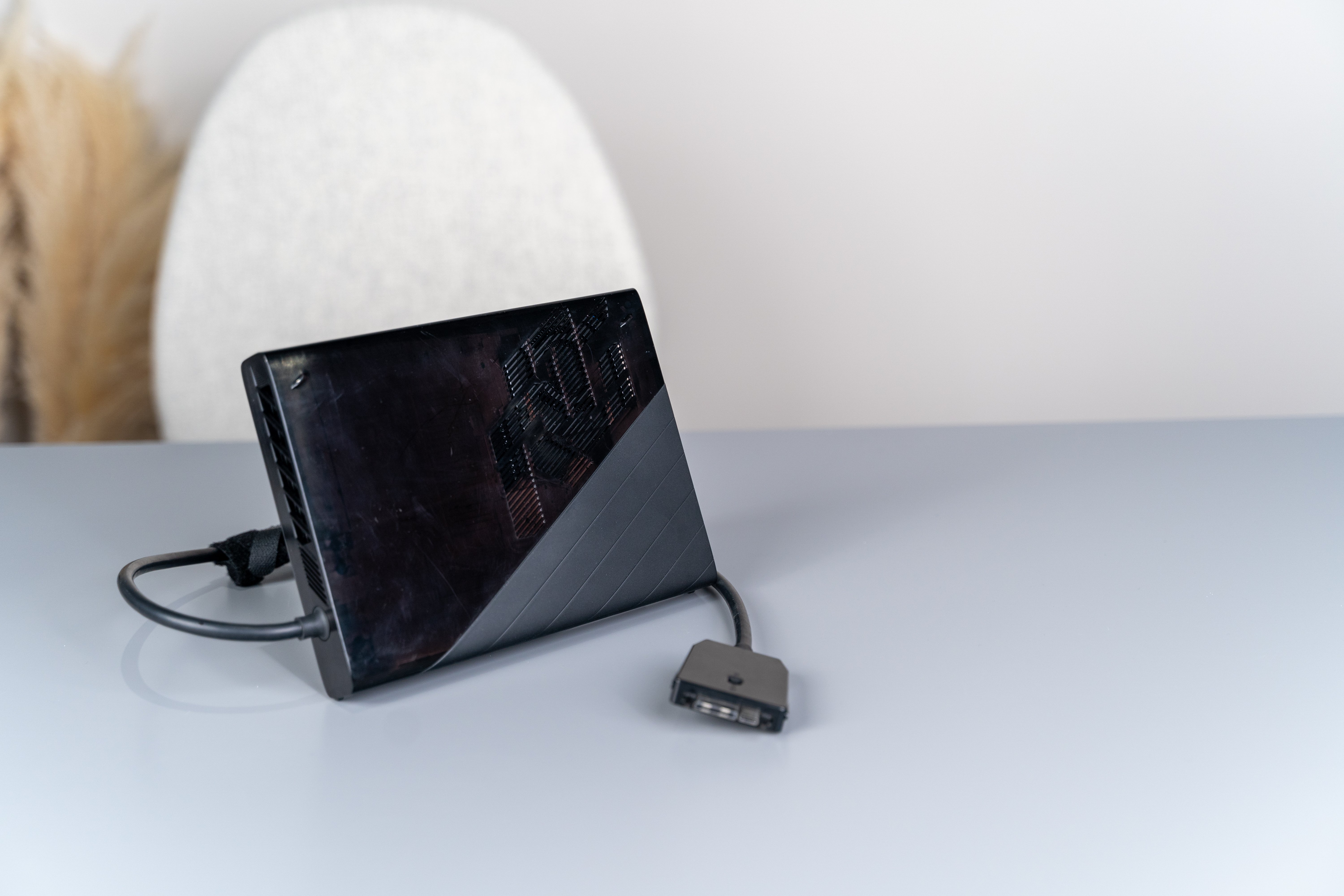 If you’re unfamiliar with the eGPU concept, the idea is that you plug a laptop (usually a less-powerful machine) into an external graphics “amplification” box that has its own dedicated GPU inside. When connected, the laptop uses the external enclosure’s GPU for graphics processing instead of its own for a boost in performance. 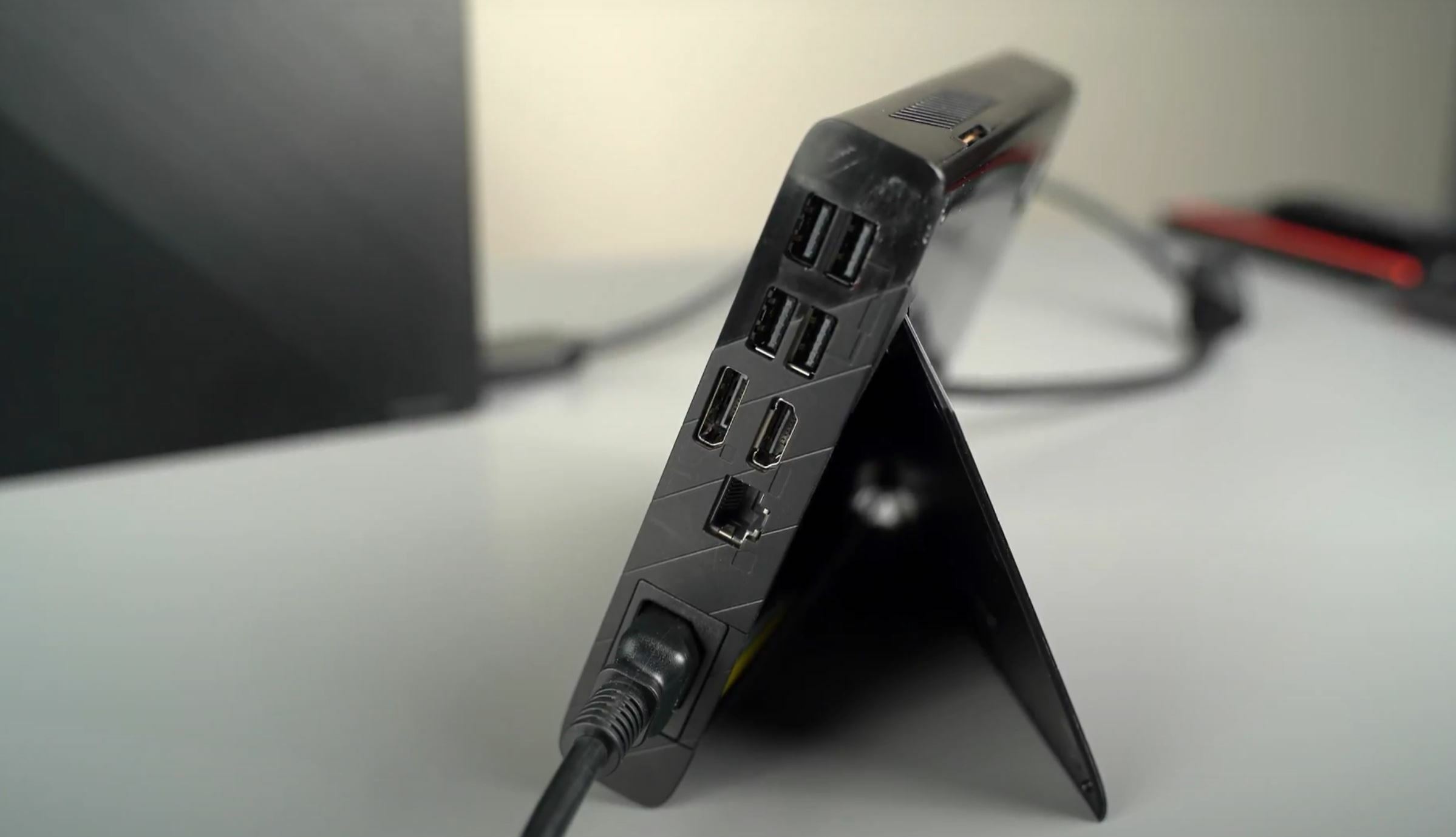 That way, you can take a portable laptop everywhere with you for daily use, and when you come home, plug it in to the eGPU for an elevated gaming experience, without having to buy a separate gaming computer. The XG Mobile takes this a step further by making the eGPU itself portable, too, so you can move around your whole gaming setup with ease.

The XG Mobile can connect to your laptop via a custom PCI Express 3.0 x8 interface, which Asus claims is faster than Thunderbolt 4 (63Gbps of bandwidth exclusively for graphics transfer). The connector and cable used are, at least at the moment, exclusive to these two products… Even speedy Thunderbolt interfaces usually see some level of performance loss between the eGPU and the laptop, and this solution seeks to mitigate that. Alienware, similarly, has utilized a proprietary port for its Graphics Amplifier eGPU for years, and Asus seeks to maintain the interface used on the XG Mobile and X13 Flow moving forward across multiple devices.

Check out the video above for more details on the Flow X13 laptop and the XG Mobile eGPU, and stay tuned for a full review once units become available.