The 2020 Ericsson Mobility Report is out, and the information within it is entirely colored by the impact of the novel coronavirus on the world this year. No surprise there. As noted in the intro, the “fundamental need for good connectivity is a cornerstone” of what happened when so many people had to stay home.

While the interesting aspect is that 1 billion people are in areas actually covered by 5G, according to Ericsson’s data, it expects only 220 million 5G subscriptions will be active by the end of this year (thanks to uptake increase in China), and only 150 million of those will even utilize a 5G-capable device. This is relatively on par with what Ericsson expected to see in the report a couple of years ago. The forecast for North America is actually unchanged.

What has changed, according to the Ericsson Mobility Visualizer, is the expected decline of 4G LTE. A couple of years ago, the data showed LTE and 5G having equivalent use by mid-2023, and then 5G would surpass it. Now, probably hedging their bets, it looks like carriers and users will be keeping LTE around and ahead of 5G subscriptions worldwide well into 2026. In fact, LTE buildout continues to meet demand, enough so that Ericsson thinks it’ll hit 95% coverage of the population by 2026. 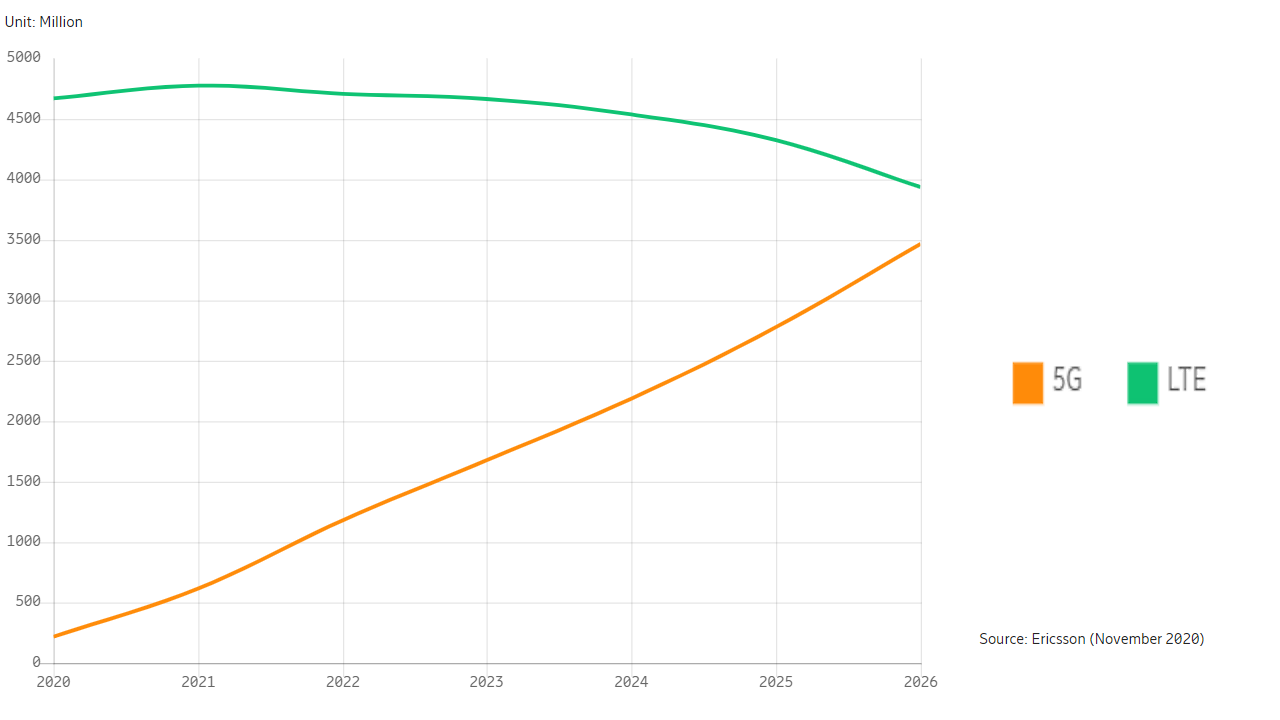 In comparison, though, the 5G uptake compared to when 4G was growing (from 2009 to 2017) is expected to still be higher. There are now 150 5G-capable devices out (including the new iPhones). There’s at least one device outside of China that costs less than $300 US Dollars. By 2026, they estimate 5G will carry more than 50% of the mobile data traffic in the world. That doesn’t even count traffic from fixed wireless access connections. 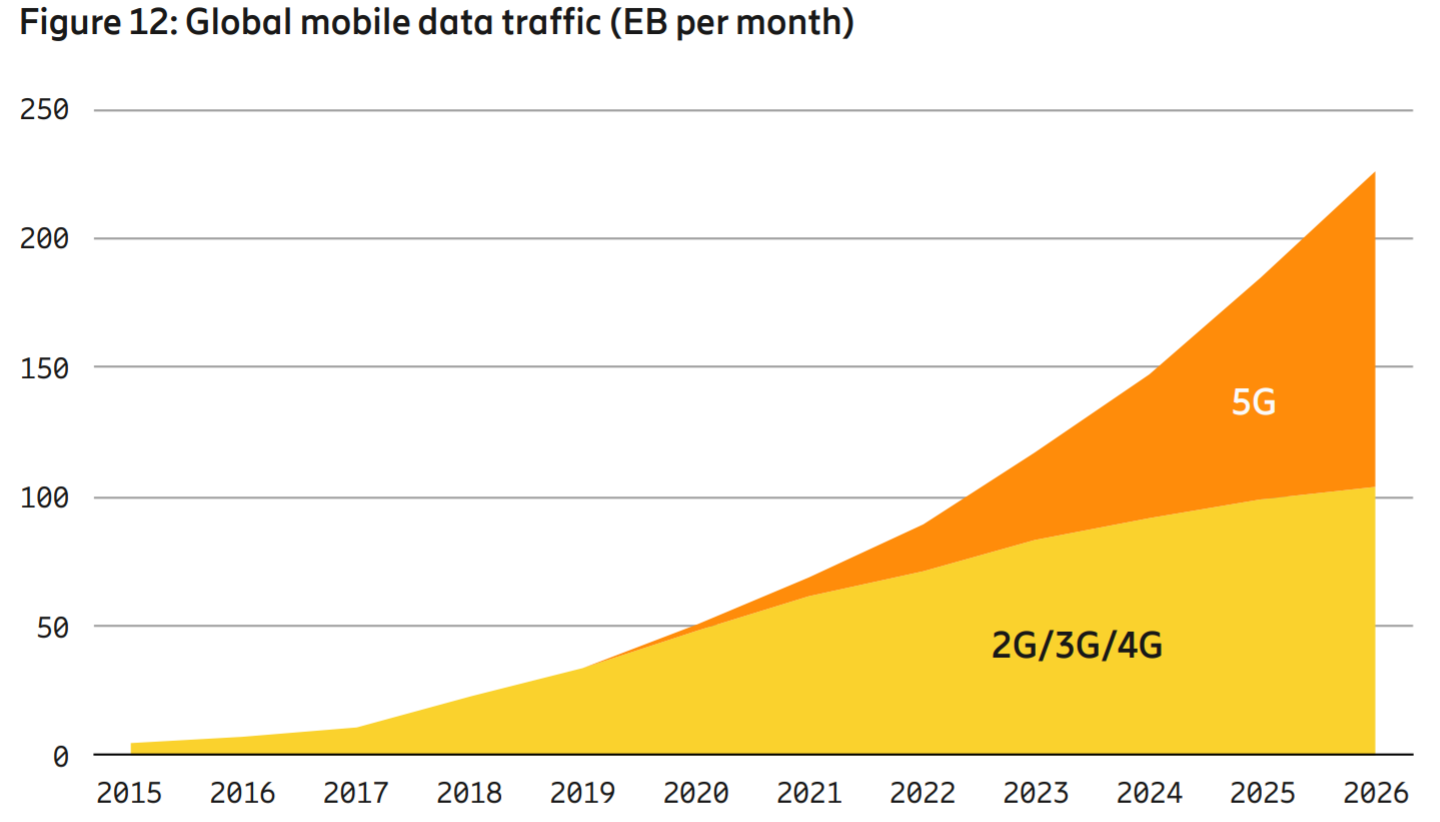 Fixed-wireless access (FWA) are internet connections that are speedy, like fiber or cable, but without the wire. They require some kind of special equipment at the customer end (called CPE for “customer premises equipment”) that doesn’t move, so this info doesn’t include battery-based Wi-Fi mobile hotspots. The connection could be 4G, 5G, or something else (remember WiMAX?). That segment is growing in almost every region except the Asia-Pacific. Two-hundred service providers have FWA now across the globe, up from 103 in December 2018. In North America, 50% of providers had FWA then; now 80% have it. 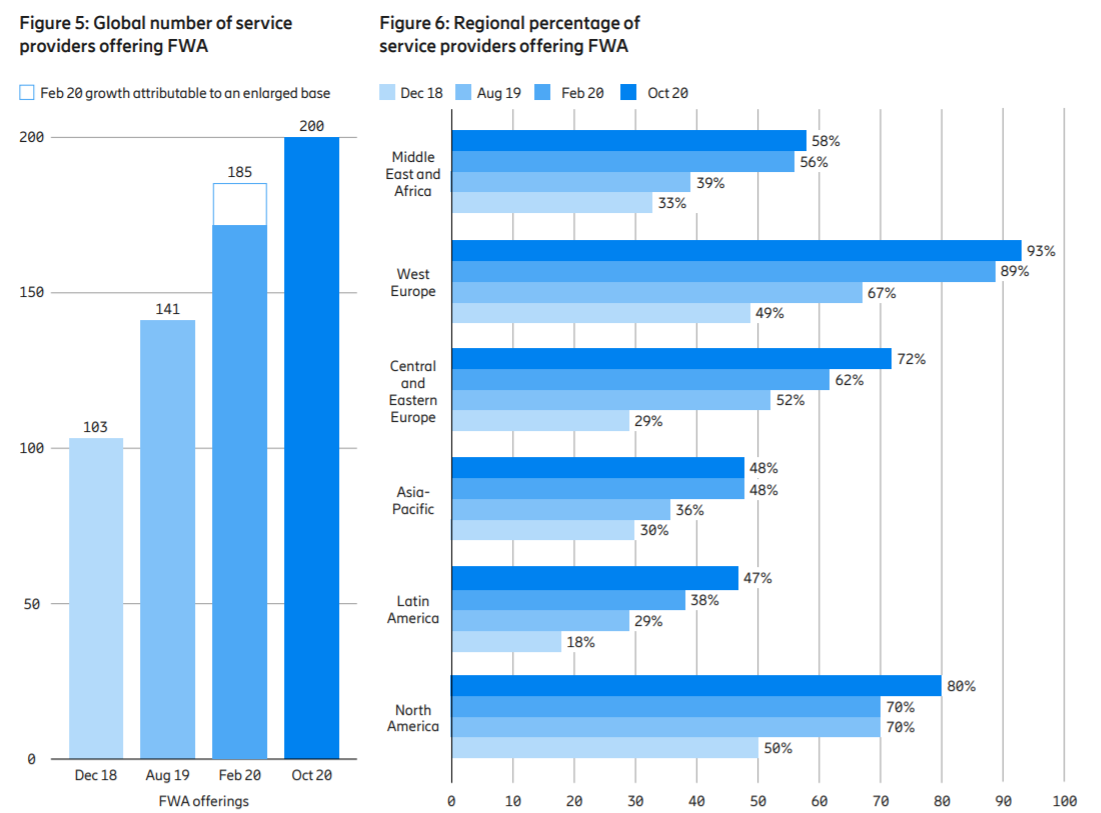 Worth noting: The report says that of the 2 billion households in the world, at the end of last year, 1.2 billion (60%) had some form of broadband. That’ll go up to 70% by 2026—in part because FWA will be “seen as a replacement option for around 300 million existing DSL customers.”

This is just the tip of the mobility iceberg in the report. Read the whole thing or take their webinar at Ericsson.com. You can also visit previous years’ reports going back to 2014 to see the changes.